Blog / Spiritual Lessons from the Human Body: An Interview with Philip Yancey

Spiritual Lessons from the Human Body: An Interview with Philip Yancey

The marvelous human body holds endlessly fascinating secrets. The resilience of skin, the strength and structure of bones, the dynamic balance of muscles—our physical being is knit according to a pattern of stunning purpose. Consider how the human body is a window into biblical teaching.

What is the meaning of the book’s title?

Philip Yancey: The phrase “fearfully and wonderfully” comes from the King James Version of Psalm 139, translated at a time when fearfully conveyed something like a spirit of awe. In the book, Dr. Brand describes in detail the incredible wonder of the human body, knit together according to the plan of the Creator of all that exists. In addition, the Bible says that, alone of God’s creatures, we human beings bear God’s image—a notion definitely worth exploring.

How has the book changed since it was first published more than 30 years ago?

Philip Yancey: We wrote Fearfully and Wonderfully Made in the late 1970s, not long after the discovery of DNA, and followed up with a sequel, In His Image. Our understanding of the human body has changed, science has changed, and the culture around us has changed. Although Dr. Brand draws timeless lessons from the body, these have different applications today than when we first wrote the books. Compare the landscape of politics to what existed 30 or 40 years ago, for example, or think of contemporary attitudes on sexual issues. I revised these two books by choosing the best parts of both and updating both the science and the applications.

Philip Yancey: The analogy between the human body and the Body of Christ appears more than 30 times in the New Testament, most fully in 1 Corinthians 12. I imagine Paul writing that passage with a twinkle in his eye, for he calls to mind an eyeball, huge and impressive yet separated from the body, to show that bodily parts we value are useless unless they serve the needs of the whole body. Then he speaks of “unpresentable” parts that we treat with special modesty—I think of kidney and colon cells—which are actually essential for life. Both the human body and the Body of Christ are composed of diverse “cells” that prove their value only as they serve the body as a whole. 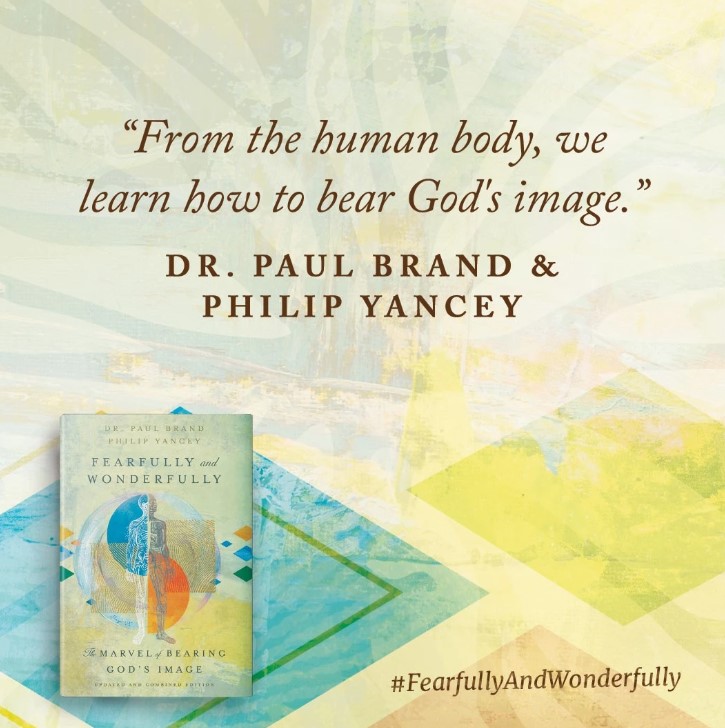 What is homeostasis and how does it reflect spiritual unity?

Philip Yancey: Homeostasis refers to the remarkable systems that keep the body’s environment stable. For instance, when I step outdoors, whether the temperature is 100-degrees or 10-degrees Fahrenheit, my internal temperature will stay approximately the same. Once again, the body finds a way to mobilize all its cells to work together for a common cause. Any spirit of division or “selfishness” endangers the living person. Think of a cell that simply takes nourishment and uses it selfishly—that’s the basis of many cancers, in which cells steal resources to form tumors that ultimately harm, not help, the body. The same disunity can occur in a family, a church, or a nation, with consequences just as severe.

What is the lesson learned from compliancy?

Philip Yancey: Compliancy describes a remarkable feature of skin as it adapts to another surface. For example, if you grasp the handle of a bicycle, your fingers and palm will distribute the stress across the entire surface; otherwise, you’d develop a blister or callus at a few stress points. Shoe manufacturers have spent decades in search of a substance that “complies” with human feet, and so far none can match the adaptability of leather, an animal skin that conforms to the shape of my feet. We make a direct application to the compliancy of the Body of Christ. Skin is soft, moldable, appealing, enveloping. If we start with rigid rules and doctrines, we’re in danger of misrepresenting the Good News of the gospel. We should lead with qualities such as love, compassion, and grace.

What is “the most trustworthy sense” and why is it so?

Philip Yancey: Touch is the most trustworthy sense. The disciple Thomas said he could not believe what he had heard through his ears or might see with his eyes; for certainty, he needed to touch Jesus’ scars. Touch is the most dependable sense, not subject to optical or audial illusion. It’s a primary sense, skin to skin. Dr. Brand tells of treating leprosy patients who had not felt human touch in many years. When he put his hand on their shoulders, they would burst into tears. We have a primordial need for touch.

How is blood “life’s source” both physiologically and spiritually?

Philip Yancey: Many people think of blood as the leaking away of life. A person gets shot and life spills out. Reverse that image, though. A transfusion of blood literally injects life into the person. Too often services around communion or the Eucharist emphasize the death of Jesus, and yet Jesus himself described his blood as a source of life. In the book, we re-envision the imagery in the Lord’s Supper as an infusion of the strength and wisdom and life of Christ himself. Jesus likened his disciples to branches of a grape vine that would wither away unless they were attached to the vine, which pumped vitality into those branches.

How can breath be compared to spiritual fuel?

Philip Yancey: Oxygen is to the body what gasoline is to the automobile: it provides the fuel that keeps the engine running. If breath stops for five minutes, you die—our dependence on oxygen is that urgent. In the Bible, the word used for Spirit is the same word used for wind or breath. Spiritual life can only be sustained through a steady, dependable supply of breath.

Why is this book needed especially now?

Philip Yancey: We live in fractured, divided times, and that applies to the United States as a nation as well as to the church. Our institutions—Congress, the courts, foreign alliances—seem to be failing us. In this book, we present a different way of looking at the urgent problems we face. Rather than trying to solve them through an organization, what can we learn from an organism? The human body gives us a whole new way of looking at issues such as how unity and diversity can work together.

Philip Yancey: I love Romans 8, which sums up the situation on planet earth. We live on a groaning planet, waiting in hope for a makeover someday, so that Earth will match the Creator’s original intent. Christians are not exempt, as Paul makes clear: we too groan in the midst of trials and suffering. Yet we have the strong promise that in the end, absolutely nothing can separate us from the love of God. More, even in our present circumstances God can use difficult things for our own good. That’s the cosmic view of redemption and hope that we desperately need.

Philip Yancey: I wish you could see my office: 27 bookcases loaded with 5,000 books. Somewhere in those books is a wealth of wisdom and scholarship to address every theological or biblical question I might have. Yet compare the work involved in digging through those pages to accessing tools like Bible Gateway, where answers are just a few clicks away. The revolution is every bit as dramatic as what happened in Gutenberg’s day, when books became accessible to the common person. Now we all have instant access to libraries full of knowledge, not to mention helpful tools such as daily devotionals.

Bio: Dr. Paul Brand (1914–2003) grew up in India, studied medicine in London, and practiced orthopedic surgery in India and the United States. He achieved world renown for his innovative techniques in the treatment of leprosy. He wrote Clinical Mechanics Of The Hand, still considered a classic in the field of hand surgery, and He Satisfies My Soul: A Celebration of God’s Creative Gifts for Body, Mind, and Spirit, as well as (coauthored with Philip Yancey) The Gift of Pain: Why We Hurt & What We Can Do About It and Fearfully and Wonderfully: The Marvel of Bearing God’s Image. Before his death in 2003, he received many honors, including the prestigious Albert Lasker Award and appointment as Commander of the Order of the British Empire.

Philip Yancey has written 25 books. Early on he crafted bestselling books such as Disappointment with God and Where is God When it Hurts? while also editing The Student Bible. More recently, he has explored central issues of the Christian faith, penning award-winning titles such as The Jesus I Never Knew, What’s So Amazing About Grace?, and Prayer: Does It Make Any Difference?. Yancey’s books have garnered 13 Gold Medallion Awards from Christian publishers and booksellers. He currently has more than 15 million books in print, published in over 50 languages worldwide. Yancey worked as a journalist in Chicago for some 20 years, editing the youth magazine Campus Life while also writing for a wide variety of magazines including Reader’s Digest, Saturday Evening Post, National Wildlife, and Christianity Today. In 1992 he and his wife, Janet, moved to the foothills of Colorado where they live now.

Enjoy the Bible with fuller understanding by becoming a member of Bible Gateway Plus. Try it right now!