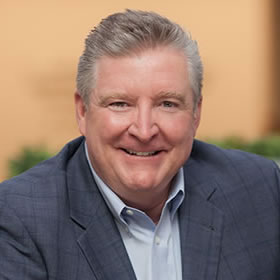 So, if you think you are standing firm, be careful that you don’t fall!
1 Corinthians 10:12

In his book Anna Karenina, Leo Tolstoy wrote, “Happy families are all alike; every unhappy family is unhappy in its own way.” With all due respect to Tolstoy, I doubt that’s true. While every family is indeed unique, the unhappy families that I’ve seen and even been a part of seem to “break” in only a handful of ways.

Dr. Tim Elmore, founder of the Growing Leaders ministry and a frequent guest on the Focus on the Family daily program, says our mistakes fall into one of two areas: abundance or abandonment. That seems right to me. As a child, I probably had more experience with the abandonment part of the equation—situations that to the outside world look especially broken. Addiction or abuse can tear apart families; one or both parents can let their anger make them inattentive.

But these days in my role at Focus, I’ve come to believe more of us suffer from the problem of abundance, and maybe especially Christian families. We hover too much. We lecture too often. We get so focused on our children’s happiness and success that we never let them fail. We hone in so intently on our children’s performance—and our own as parents—that we develop an unhealthy and wholly futile drive for perfection.

How strange that anyone should use the word perfection in conjunction with Christianity! Of all the world’s big religions, only Christianity tells us explicitly that we can’t achieve perfection. While Buddhists seek Nirvana and Jews seek to follow the Law, we Christians live under a blanket of grace. God knows how messed up we are, and yet God loves us even when we inevitably miss the mark.

But why, then, despite this divine shower of grace, do we struggle to show that same grace to our spouses and children? The world calls out us Christians for being judgmental, and way too often the world has a point. We in the Christian community continually speak the words “unconditional love” and “saved by grace,” but we rarely apply them, whether in the culture at large or in our own homes. And so we mess up our relationships in horrible ways. 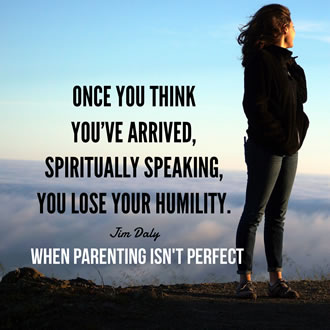 A few guys in Christian ministry talk incessantly about grace and forgiveness, but secretly (or in some cases, not so secretly) believe they’ve gotten over the whole “sin” thing. They’ve arrived at total sanctification. They’ve become exactly the person God wants them to be. But you know what? Their families, or at least the families I’m aware of, are utterly broken. The struggles of their grown children have led them to rebellion. Now, these leaders might say their families suffered because of the very ministries they led—the distractions, the interruptions, the demands, the fame. But I’m not so sure. I believe that when once you think you’ve arrived, spiritually speaking, you lose your humility. You lose your ability to engage with people who, inescapably, are so much “weaker.”

And what happens when those weaker people are your very own children? You demand more from your kids than they can ever deliver, which leads to fights, resentment, rebellion, and estrangement. It’s dangerous and utterly unhealthy to imagine you’ve arrived. We’re all broken, and imagining ourselves as faultless only reveals the worst kind of vanity. On this earth we cannot arrive at a place where we no longer sin. If we could do that, we wouldn’t need Jesus.

But even those of us who know we’re broken and who know deep in our bones our desperate need for God’s grace still feel tempted by the siren call of perfection. We don’t want to show ourselves as anything less than perfect. We hate to show weakness of any sort. And because we feel we get judged as parents by how well our kids perform or behave, we can demand perfection, or near perfection, from them too.

Few, if any, parents would say they expect perfect kids. But sometimes our actions expose our good intentions as lies.

A dysfunctional family takes root when a parent begins to seed unhealthy behavior. It happens when moms and dads try to shame or demean their sons or daughters to teach them a lesson. It happens when they use insults or biting sarcasm to drive their point home. Eventually, it reaches the point where a child can feel as though he or she can never be good enough. And then what happens? The kids check out. They know they can never reach the bar. And so their behavior takes a nosedive, which ironically makes parents raise the bar even higher.

It doesn’t take a genius to figure out what happens next. Kids want—no, they need—to feel love and acceptance. So they try to find that love and acceptance with friends. They know their friends will accept them, no matter what, even if they do drugs, have sex, or drink heavily. They know their friends will love them regardless. And maybe their circle of friends even encourages such behavior. Suddenly, the things that parents tried to shame their children into not doing become the very things that they think they have to do in order to feel loved. They get love the only way they know how—the love they should’ve gotten at home all along.

In the Christian community, we never stop talking about grace. We base our faith and our whole lives on it. Those of us in the evangelical world hear constantly that we can’t work our way to heaven. But what happens when it comes to our kids? Sometimes we forget. 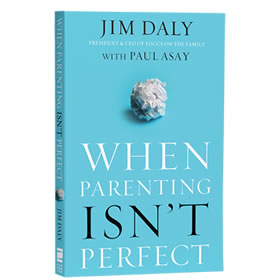 Taken from When Parenting Isn’t Perfect by Jim Daly. Click here to learn more about this title.

Perfection is the enemy of parenting.

Jim Daly sees and hears from mothers and fathers trying hard to pursue perfection. They listen to the best experts and read all the right books. When someone gives them a “World’s Best Mom” or “No. 1 Dad” coffee mug, they want it to be true. And they want their children to pursue perfection, too.

It’s admirable for parents to be the very best moms and dads they can be for their children. But sometimes in so doing, they leave grace behind—both for themselves and their children. Jim believes that our quest for perfection, a quest that he believes is particularly strong among Christians, runs counter to God’s own boundless gift of grace. We can become Pharisaical parents, quoting endless rules and holding everyone to impossible standards. But God doesn’t want us, and our kids don’t need us, to be perfect. As parents, we’re called to simply do our best. And when we fail—which we will—we’re called to try again tomorrow.

Though he’s the President of Focus on the Family, Jim does not promise that his book will be a catalyst for a perfect family. But it can help point the way toward a good family—one that feels safe and warm; one filled with love and laughter. This book will encourage mothers and fathers to embrace the messiness of parenthood and show grace to their own less-than-ideal children. Jim, through his own experiences, expertise, and array of stories, will lead both moms and dads to a better understanding of what being a good family is all about.

Jim Daly is the president and CEO of Focus on the Family. Daly has received the 2008 World Children’s Center Humanitarian Award and the 2009 Children’s Hunger Fund Children’s Champion Award. He has appeared on such television programs as ABC “World News Tonight” and PBS’ “Religion & Ethics”; and been featured in Time, The Wall Street Journal, The New York Times, USA Today and Newsweek, which named him one of the top 10 next-generation evangelical leaders of influence. Daly and his wife have two sons and reside in Colorado Springs, Colorado.