Blog / What’s the Best Way for Parents to Discipline Their Children?

What’s the Best Way for Parents to Discipline Their Children?

Editor’s Note: Being a parent is a daunting responsibility. How do parents know when they’re getting it “right” with their children? Is it possible for parents to know the right way to discipline their children in each situation? Andy and Sandra Stanley believe it is. In today’s post, Andy talks about how they discovered and practiced the key to effective discipline in their household, taken from their new book Parenting: Getting It Right.

Start children off on the way they should go, and even when they are old they will not turn from it
— Proverbs 22:6

One of Sandra’s most brilliant moments of parenting came when the boys were eight and ten years old. She and I went out for the evening, and our longtime babysitter Pam looked after the kids.

When we walked through the door at the end of the night, we followed the usual script, asking her, “How’d it go? Was everyone well behaved?” Typically, Pam cheerfully reported that everything had been great. This time, however, she said, “Well, the boys …” She was reluctant to fill in the details of their misdeeds but eventually did. And it wasn’t good. They had been extremely disrespectful to her.

The next morning, they knew they were busted when Sandra woke them up earlier than normal and sent them straight to their desks to write apology notes. We were homeschooling at the time. Well, Sandra was. Once she deemed their phonetic spelling good enough, she said, “Get dressed in your nice clothes, get all the money out of your spending jars, and meet me in the car.” The boys had no idea what was going on. But they knew this was big. Side note: They were just old enough to appreciate money and just young enough not to have much of it.

After everybody was buckled in, Sandra laid out the game plan. First, they would head to the grocery store where the boys would each buy Pam flowers with their own money. Then they would drive to Pam’s office, deliver the flowers and notes, and apologize in person for their behavior the night before.

I wasn’t there to see it, but I know for certain that as the boys walked past all of Pam’s colleagues on the way to her desk, they were wishing we had taken away every privilege and every toy and canceled Christmas instead of subjecting them to this. They would have given up everything to avoid this consequence.

As I said, it was brilliant. Brilliant and oh so effective.

What’s the Point of Discipline?

Why do we discipline our children? What are we trying to accomplish? Maybe you’ve never stopped to think about it. I’m convinced most parents haven’t. When your child misbehaves,

You probably do or say what your parents did or said to you. Or perhaps the pendulum has swung the other way and you intentionally don’t discipline your kids the way your parents did. That’s not a discipline goal. That’s a not goal. I’m not going to discipline like my parents! But even that doesn’t answer the question of why you discipline at all.

Either way, you are in the majority because most parents never establish or identify a goal when it comes to discipline. And if there is no preestablished goal, there is rarely any discipline. Punishment, yes. Payback, yes. Teach ’em a lesson! Maybe. But what’s the lesson? Don’t get caught next time?

Discipline makes a person better. Punishment rarely makes anybody better. It simply makes them more careful. And perhaps bitter. Not better. The message of punishment is this: If you don’t obey me, bad things will happen to you. If you inconvenience or embarrass me, I’ll inconvenience or embarrass you. There’s rarely any positive or permanent change, other than to the relationship. More on that later.

The Goal of Discipline

When honoring others is the chief value in a family, disobedience, dishonesty, and disrespect are problematic because they dishonor another person. They damage a relationship. Or, to put it another way, at the heart of every transgression is a someone, not a something.

The goal of discipline is to teach your child how to restore the relationship they damaged.

This is what Sandra got so right in the way she handled the boys’ behavior toward Pam. Taking away their LEGOs or making them do extra chores would have been pointless punishment. Pam’s feelings still would have been hurt, and the boys only would have learned to dial it back a bit next time. Instead, Sandra walked them through the steps of making things right in the relationship.

This is a skill that has to be taught. You teach your children to use a fork. You teach them to tie their shoes. And you have to teach your children how to restore a relationship. You’ve met plenty of adults who can eat with a fork and tie their shoes but who never learned to restore a broken relationship. They never learned because no one ever taught them, and perhaps they never saw it modeled either.

So they say things like, “I don’t know why you’re still upset. I said I was sorry!” No one ever taught them that an apology alone doesn’t rebuild a relationship. In some cases, an apology alone makes it worse. We should discipline with the goal of teaching our children the critical life skill of making things right with the people they’ve wronged. Your child’s future spouse, colleagues, and friends will be glad you did. Your grandchildren will be glad you did. 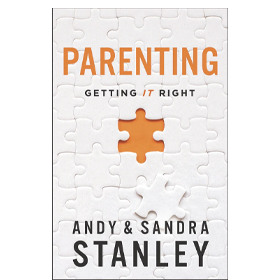 Adapted from Parenting: Getting It Right by Andy & Sandra Stanley. Click here to learn more about this book.

Am I getting parenting right? Most parents, at any and every stage, find themselves asking this question.

Whether you’re sleep deprived with a colicky newborn or navigating the emotional roller coaster of a teenager, parenting has its ups and downs, its confusion and clarity, its big blowups and small victories. And no matter our family makeup or our children’s personalities, many of us experience anxiety over our children’s futures and often fear making a mistake.

Andy and Sandra Stanley are no strangers to this feeling. As parents of three grown children and cofounders of North Point Ministries, they are seasoned experts on faith and parenting. Together they have spent decades counseling countless families, mentoring others, and learning from mentors of their own, all while leading one of the largest churches in the country.

In Parenting: Getting It Right, Andy and Sandra combine their experience and wisdom into a guide that helps readers understand and live by essential parenting principles. In an inviting, conversational approach that is both informative and accessible, the Stanleys help readers understand the most important goal in parenting and learn the steps to pursue it by:

You don’t have to constantly doubt if you’re getting it right as a parent. Start here and feel confident about raising a healthy and happy family.

Andy Stanley founded Atlanta-based North Point Ministries (NPM) in 1995. Today, NPM consists of eight churches in the Atlanta area and a network of 180 churches around the globe that collectively serve over 200,000 people weekly. As host of Your Move with Andy Stanley, which delivers over 10.5 million messages each month through television, digital platforms, and podcasts, and author of more than 20 books, including Irresistible; Better Decisions, Fewer Regrets; and Deep & Wide, Andy is considered one of the most influential pastors in America.

Each month you’ll receive an email with a deal, a feature article, and book samples designed to help you find more incredible books for your reading and listening lists.