Blog / Finding the Courage for Your Moment

Finding the Courage for Your Moment

In recent months, I have felt strongly that God is raising up women of today to stand firm and carry an unshakable and unbreakable spirit of courage, using the skills and resources they possess to make an impact on this generation. There will always be people or situations that try to limit our impact, silence our voice, and keep us from our purpose. We need courage to stand up to people who oppose us, not only for ourselves but also for those who look up to us, whether they be our siblings, our friends, our coworkers, or strangers on social media.

But what is the source of courage? Where does it come from? Why do some seem to be more courageous than others? We can find the courage we need in our relationship with God and his Spirit within us. He promises never to leave or forsake us, and that should make us brave! I discovered that I could rely on God to give me courage when I most needed it, and when I called on him, I knew his Spirit was with me.

During The Bachelor finale (season 24), I had a moment when I embraced true, godly courage: showing restraint and remaining silent. Yet some moments in life require us to speak out and use our voices. True God-honoring courage is having the wisdom to discern when to speak and when to be silent. There is a story in the Bible of a woman who is the perfect example of someone who rose in courage and used her voice, even in the face of opposition. The book of Esther tells the story of an unlikely queen who, in spite of fear and great personal risk, spoke out boldly to save her people from destruction.

Esther didn’t seek out the position of queen. The position sought her. The king had been rejected by his queen at the time, Vashti. She had been summoned one evening to present herself to the king and his guests, but Vashti refused to come, feeling it would be beneath her to entertain the king and his friends with her beauty. This defiance infuriated the king, and he issued a decree to search for a new queen. Esther, a Jew in exile, was one of the women under consideration.

It only takes a minute to create your own Bible Gateway free personal account and you’ll immediately upgrade your Bible Gateway experience. Do it right now!

As we read about Esther’s upbringing and history, we learn that she was an orphan, with no family to call her own except one cousin, Mordecai. Young and away from her home country, Esther was taken into the royal courts. Here, with all the other women, she was primped and prodded and run through the beautification routine. She was pleasing to the king’s eye and won his favor. The royal crown was placed on her head and she was declared queen. Yet Esther concealed an important detail about her identity—her Jewish heritage.

Upon overhearing Haman, one of the king’s advisors, plotting to destroy the Jews, her own people, Esther had a choice to make. Would she confront the king and reveal her heritage in an attempt to save a nation, or would she suffer in silence?

Esther needed to save her people, but it would require incredible courage. Anyone who went into the king’s presence without being summoned could be executed (for this was a rule during this time), and the king had not requested her presence in a month. Of all the Jews in the empire, she alone had access to the king, but approaching him uninvited could be her death sentence.

Mordecai pleaded with her to speak to the king on behalf of the Jewish people, reminding her of God’s purposeful timing by saying, “If you remain silent at this time, relief and deliverance for the Jews will arise from another place, but you and your father’s family will perish. And who knows but that you have come to your royal position for such a time as this?” (Esther 4:14).

The biggest decision of Esther’s life came down to this one moment. Esther understood that her promotion wasn’t just for her personal pleasure. She had been put in the palace to serve a great purpose. She had a choice to make: to play it safe for herself personally and gamble the risk of what might happen next or to brave the unknown, come what may. That was all it took to summon the courage needed to fulfill her mission.

Sometimes being courageous means braving the battles no one else is willing to fight.

Putting on her best royal robes, Esther approached the king, unsummoned, and eventually told him of Haman’s plot against her people and made her request for help. In a miraculous turn of events, the king chose not to execute her and ordered that the Jewish people be saved.

Esther had to overcome fear and battle opposition. Even though times are different in today’s world than they were thousands of years ago, Esther still had to battle the same issues we face today, and she was called to rise in courage as you and I are. When Esther was up against the toughest challenge of her life, she drew up boldness and courage to speak out against the oppression of her people because those characteristics were core to who she was. She responded to her circumstances from a position of strength. While we might think her courage to approach the king was just an adrenaline-fueled moment, a closer look reveals something crucial: she was prepared for this moment long before it arrived.

Even though this story was written thousands of years ago, many of the struggles Esther faced are relatable to what you and I face today. Esther had to decide whether to keep her faith a secret to protect her family, face opposition and attacks for her beliefs, and experience the fears and loneliness of knowing she had to take a stand for her people even if it cost her her life. But no matter what came, Esther used each moment as an opportunity to cultivate strength, grace, and courage. Her courage, along with her preparation, changed the course of history for generations to come.

We will all have tipping points, moments that change everything. While we don’t know exactly when they will come, we can come to those moments fully prepared. Behind every courageous moment are hundreds of other moments that cultivated that courage.

As young women today, we need to cultivate courage from within to face the moments ahead of us. I believe God is raising up Esthers all over the world who will take their stand and be a voice. Yes, we will have to battle fear and face opposition. But don’t grow battle-weary; your time is now, and God will give you strength!

Cultivating courage means that rather than letting obstacles hinder us from our purpose, we prepare our hearts and minds to let the pain, fear, and opposition be a chapter in our story and not the ending. So, I ask you, what will you do when you are called to be courageous? Will you stand up when needed? What will you do when your moment comes? Whether your moment seems big or small, whether it will define a generation or make all the difference just to you, be ready. The best news is that God has empowered you for exactly this. He has placed his courage inside you so that when the next challenge, large or small, comes calling, you can know with confidence that you were made for this! 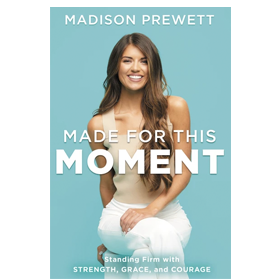 Adapted from Made for This Moment: Standing Firm with Strength, Grace, and Courage by Madison Prewett. Click here to learn more about this book.

How do you stand firm in your convictions in a world that’s trying to pull you down? Madison Prewett helps you keep your standards high and your roots deep in this strikingly personal look at why you were made for this moment.

Made for This Moment will appeal to fans of Sadie Robertson, Jordan Lee Dooley, and Annie F. Downs, as well as to Madison’s faithful following from her remarkable Bachelor season. Readers who are eager to make wise choices in dating, career, and family will love Madison’s authentic voice and real-life challenges, making this a great gift for graduations, birthdays, or life transitions.

Made for This Moment will help you navigate the complex realities of living in an age of social media and confusing standards. God’s timing is not a mistake—you were made for such a time as this.

Madison Prewett earned her bachelor of science in communication from Auburn University and her certificate in ministry in pastoral leadership through Highlands College. She went on to serve on the creative team and help lead the college ministry for her church.

Madison was a finalist on season 24 of ABC’s The Bachelor. An Alabama native, Madison has been involved in many outreach programs, including Adullam House, Sozo Children, Orphanage Emmanuel, Haddie’s Home, BigHouse Foundation, and The Dream Center.