The first national survey of the worldview of Americans conducted by the Cultural Research Center at Arizona Christian University (@crcacu) shows that although seven out of ten consider themselves to be Christian, only 6% actually possess a biblical worldview. 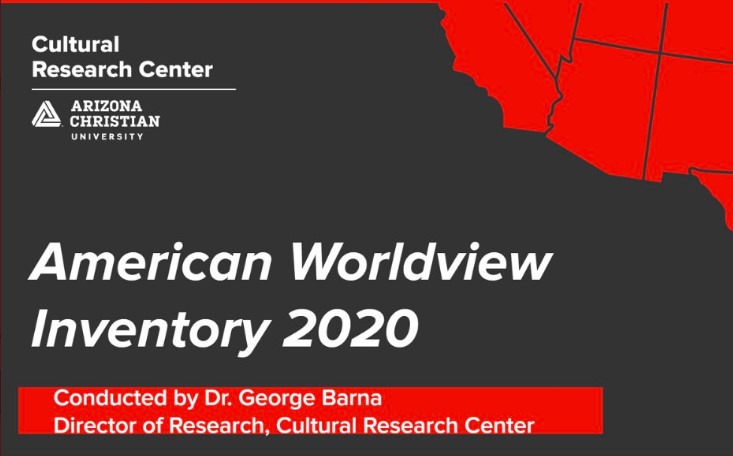 What is the American Worldview Inventory 2020 and why was it conducted?

George Barna: Having done a very wide range of research studies since the early 1980s, I’ve concluded that if we want to significantly impact American culture, we have to start with peoples’ worldview. Everybody has one, but few people think about it or articulate it.

A worldview is like the operating system of a computer; it directs our choices and determines what we do. Our worldview is the filter through which we experience, interpret, and respond to the world.

Ideally, people will develop a biblical worldview, but that’s just one worldview choice of many they have. Because there’s little serious research about worldview, and no tracking studies of the prevalence of a biblical worldview, we’ve initiated this nationwide annual survey to give leaders the data they need to make better decisions about how to move people toward biblical thought and behavior, and to raise greater awareness about the importance of worldview in our lives.

George Barna: The survey used 51 questions about belief and behavior to measure worldview. (We have a version we use among our students at Arizona Christian University every year that contains 96 worldview questions.) Those questions are divided into eight categories:

Over the 25 years that I’ve been measuring worldview, one thing that emerged is that nobody I have yet interviewed—and those studies have encompassed more than 20,000 people—has had a pure worldview. Everyone has a syncretistic worldview—drawing on perspectives from a variety of worldviews. So the way we categorize someone as having a worldview is based on them answering 80% or more of the belief questions and 80% or more of the behavior questions in ways that are consistent with biblical teaching.

According to the study, the number of American adults holding a biblical worldview has declined by 50% over the past quarter century. To what do you attribute that?

George Barna: It’s due to a combination of factors. Two decades ago I found that a person’s worldview begins developing between 15 to 18 months of age and is almost fully formed by age 13, and then is expanded and refined until their mid- to late-twenties. So children are critically important in the study and transmission of worldview. Deuteronomy 6 as well as other passages (Prov 8:32, 14:26, 22:6; Deut 4:9-10, 11:1-8, 11:18-28, 12:25-28; Lk 2:41-49) describe the importance of families investing in the development of their child’s worldview, but we’ve found that few American parents accept that responsibility these days. Part of the challenge is that parents don’t think about worldview development and another element is that parents are ill-equipped to engage in such a process. In fact, just 5% of the parents of children aged 5 to 13 have a biblical worldview; they’re clearly handicapped in the developmental process because you cannot give what you do not have.

The media, schools, laws, and peers also have a big influence on worldview, but none of those influence entities typically are actively and intentionally conveying a biblical worldview to young people. Churches could be training parents and teachers for the job, but very few churches have any kind of intentional worldview development process in place—for parents or children. The result is worldview by default, formed by exposure to American culture, which does not lead one to a biblical worldview.

What types of people did you survey?

George Barna: Surveys such as the American Worldview Inventory are designed to survey a representative sample of the adult population, meaning everyone 18 or older. The sample was designed to be reflective of the national distribution by age, race, gender, geography, and other demographic attributes.

Are there correlations between the segments and people’s ages? How about geography?

George Barna: The younger a person is, the less likely they are to possess a biblical worldview. The percentages drop from 9% among those 50 or older to 5% among those 30 to 49, and just 2% among people 18 to 29. Regionally, it’s as you’d expect. People in the West and Northeast have the lowest incidence, people in the South and Midwest are higher.

The study says a mere 2% of 18- to 29-year-olds possess a biblical worldview. Do you have an idea why?

George Barna: The survey was not designed to find out why anyone does not have a biblical worldview, only whether or not they have one. With younger adults I’d hypothesize that it’s due to a confluence of realities.

First, a person’s worldview is typically fully formed by age 13, then refined through their late 20s, yet there’s virtually no intentional and systematic effort to facilitate the development of a biblical worldview among people in that age segment.

Second, the dominant influence agents—media, parents, government, schools, peers—do not seek to develop a biblical worldview among those they influence.

Third, most Christian churches don’t do anything to intentionally develop peoples’ worldview, and nothing to measure worldview. The result is worldview by default.

How does this study show that growing numbers of people are moving away from believing that the Bible is true, relevant, and valuable for their lives?

In your research what have you discovered about Christians’ stated beliefs and behaviors? Do they logically correspond?

George Barna: One of the reasons we make it a point to measure both beliefs and behavior is because we’ve found that you do what you believe. If your behavior doesn’t represent your beliefs, it’s not really a belief.

Now, we also know that nobody we’ve ever interviewed has a pure worldview, regardless of which worldview they embrace—and I’ve led studies about worldview among tens of thousands of people over the years.

So the two patterns we’ve found are that people’s behaviors display their real beliefs, and that there is almost always an inconsistency within the aggregate body of beliefs each person possesses.

George Barna: That’s a tough question to answer, kind of like asking which one of your children is your favorite. Among the passages I contemplate most often are Romans 12:1-2; Mark 12:30-31; Psalm 51:17; and the passages where Jesus defines a disciple (John 8:31, 13:35, 15:8). The Romans verses push us to develop a biblical worldview and to push back against the world and its ways. The Mark passage describes what matters most in life. The prayer in Psalm 51 reminds me that I must be fully broken of my relationship with sin. The verses in John clarify what discipleship is about. Taken together, these various insights help me to remain on a path to wholeness.

George Barna: For years I’ve been grateful for Bible Gateway. It’s a readily available source of scriptural texts and word searches. I’ve used it at church services when I couldn’t access biblical texts I needed. The access to so many different translations is a frequent help as I seek to understand the various ways specific verses are translated or interpreted. I appreciate the easy access to Bible Gateway and use it in my studying and preparation on a regular basis. I’m grateful for its existence.

George Barna: Thank you for giving me this opportunity. And thank you to you and your team for helping to keep Bible Gateway active, robust, accurate, and available.

Bio: George Barna is the Director of Research at the Cultural Research Center and a professor at Arizona Christian University. He is also the founder of the Barna Group, a research company that has set the standard for understanding trends in American culture. Dr. Barna has written more than 50 books, including numerous award-winners and New York Times bestsellers. He is also a Fellow at the Townsend Institute, has taught at the undergraduate and graduate level, and has pastored two churches.

Develop your biblical worldview when you become a member of Bible Gateway Plus. Try it right now!