Blog / You Can Always Use One More Translation, or Why I Read the NIVNKJVESVNLTNASBMSGKJVCSBNET Bible

You Can Always Use One More Translation, or Why I Read the NIVNKJVESVNLTNASBMSGKJVCSBNET Bible

When I answered the phone, I was met with sniffles and sobs. It was the sort of call I dreaded. I’m not a professional counselor and had no experience talking someone down from an emotional precipice. So, I did the only thing I could. “Sir,” I said, “how can I pray for you?”

It was several years ago and I was on staff at a well-respected international ministry that maintained a 24-hour prayer line for people in need. On that divinely-appointed Wednesday morning, the call center’s switchboard was beyond capacity, so calls were routed to anyone in the office with a phone. As an early riser, the phone on my desk had sprung to life and I found myself talking to a man in crisis.

I repeated myself, “Sir, I’d like to pray with you, if that’s okay.”
Then, he just blurted it out: “I breed dogs!” he said, and continued to cry.

Now I was out of my depth and utterly confused. “You’re a dog breeder?” I asked.

“Yes, and with every dollar I give to the church I’m just making God angrier and angrier!” the caller told me. “I didn’t know I was sinning,” he said, “until I read my Bible this morning.”

I kept asking questions and discovered that the man on the other end of the line was a relatively new believer. He had been using a reading plan to learn the Scriptures, each morning spending time in his King James Bible, faithfully going one day at a time from Genesis to Revelation. He had gotten to Deuteronomy, where he read, “Thou shalt not bring the hire of a whore, or the price of a dog, into the house of the LORD … for even both these are abomination unto the LORD thy God” (Deuteronomy 23:18 KJV, emphasis added).

In the world of the Old Testament, the word dog was a euphemism for a male prostitute. The King James translators, attempting to render the Hebrew of Deuteronomy as literally as possible into the English of their day, simply provided this apparently strange text without interpretation.

[Read the Bible Gateway Blog post, Why View a Bible Passage in More Than One Bible Translation?]

That morning, I prayed with the man on the phone, assured him that his tithes were as good as anyone else’s, and suggested that he pick up another translation or two to have handy when he came across something difficult to understand. For example, the NIV tells us, “You must not bring the earnings of a female prostitute or a male prostitute into the house of the LORD your God,” noting the dog language found in the original Hebrew in a footnote.

Now, that’s an extreme example, and we should recognize that in the English-speaking world, we are blessed to have a plethora of reliable and readable translations from which to choose. When it comes to the Bible, the most important part is reading it. We will benefit. We will be blessed. God himself makes this promise concerning his Word: “It shall not return to me empty, but it shall accomplish that which I purpose, and shall succeed in the thing for which I sent it” (Isaiah 55:11 ESV).

Still, it’s because we’re so rich with Bible translations that we ought to take advantage of our wealth. There’s much to be gained from reading the Bible in more than one translation. Consider another example, from one of the most familiar passages of Scripture: the story of the first Christmas as recorded by Luke. You know how it goes: Joseph and a very pregnant Mary head to Bethlehem to register for the census, only to discover that there are no rooms left for them at the local inn, so they hunker down in a stable with the sheep for the night.

Except that’s probably not what happened.

While most English translations keep the “inn” in the story, there are good reasons to rethink this detail. For one, Bethlehem at the time of Jesus’s birth was a small village of probably only a few hundred people—too small to sustain a proper inn. But another reason to shut down this Christmas motel of legend is that the Greek word traditionally translated inn in Luke 2—katalyma—is not the word for inn the evangelist used elsewhere. In another familiar passage, the parable of the good Samaritan (Luke 10:25–37), the title character helps a robbery victim by bringing him to an inn, but the word Luke employed there is entirely different.

If only Luke used katalyma somewhere else in his Gospel or in Acts, then we might be able to put the pieces of the Christmas story together in better order. Thankfully, Luke did just that. The “upper room” where Jesus and his disciples shared the Last Supper together (Luke 22:1–38), and where the Holy Spirit later fell on the disciples in tongues of fire (Acts 1:12–2:4)—that was katalyma. And it’s why some Bible translations now rob small children of the meaty innkeeper role in church nativity plays: “Then she gave birth to her firstborn Son, and she wrapped him tightly in cloth and laid him in a manger, because there was no guest room available for them” (Luke 2:7 CSB, emphasis added).

Do you see what a difference this small change makes? Instead of Joseph and Mary being strangers to town without a friend in the world, they were more likely the guests of their extended family. (After all, Bethlehem was Joseph’s ancestral home.) Instead of being thrust into the cold to deliver the Son of God, Mary was made comfortable in the lower room of the house where the animals were bedded on cold nights. These were likely the best accommodations available, given all the other family members in town for the census sharing the upper guest room. Luke’s Gospel tells us about God’s provision for the holy family and it all hinges on a single word.

U2 front man Bono once said, “As a songwriter it’s very clear to me that Eugene Peterson is a poet as well as a scholar. He brings the musicality to God’s Word that I’m sure was always there.” Eugene Peterson, of course, served as the primary translator for The Message, and the musicality to which Bono refers is the cut-to-the-heart beauty of the Bible that can easily be lost to us when we become too familiar with our favorite passages and verses.

Now, to be fair, if someone read The Message day in and day out, these words might begin to lose their flavor. But that’s my point: by taking advantage of the many fine translations available to us, we can keep Scripture from becoming something mundane—something that misses the heart. And this is true not only when we add a more paraphrastic translation like The Message to our Bible reading. If you don’t dive into the King James Version much, give it a try. Many people have discovered the reason that the much-loved Authorized Version has stood the test of time: its poetic style and cadence are simply beautiful.

The End of the Bible Battle?

If you’ve been a Bible reader for any length of time, you’ve probably seen a shot or two fired at popular Bible translations. You may have heard that the New King James Version is just a rehashing of the old KJV with the Thee and Thou language removed (a rumor that’s completely untrue). Or you may have heard that the translators of the New International Version have jettisoned certain controversial verses from the text of Scripture to make it more palatable (also completely untrue).

The truth is, Bible translation is serious and expensive work that requires a team of scholars, linguists, and grammarians. And to get off the ground, a good translation must meet the needs of pastors, students, and a wide swath of Bible readers. Creating a new Bible translation is not a task undertaken lightly; instead it’s done over the course of years by people who love God’s Word and want to see it change more lives around the world.

And here’s something to keep in mind: In the vast majority of cases, when a New Testament author quoted the Old Testament, he used the Septuagint, a Greek translation of the Hebrew. The Septuagint could be described as the ancient world’s most popular thought-for-thought translation of the Jewish Scriptures, on par in translation style with the NIV or NET. And yet Peter, Luke, John, and others presented it as the authoritative words of the Lord, no different than if they had held high the tablets of Moses.

Bible translation is a gift to God’s people. We can be confident that when we take up our Bibles to read, we are handling the very Word of God. So, let’s get beyond Bible battles and partake of the translation feast God has set before us. There is so much to be gained. 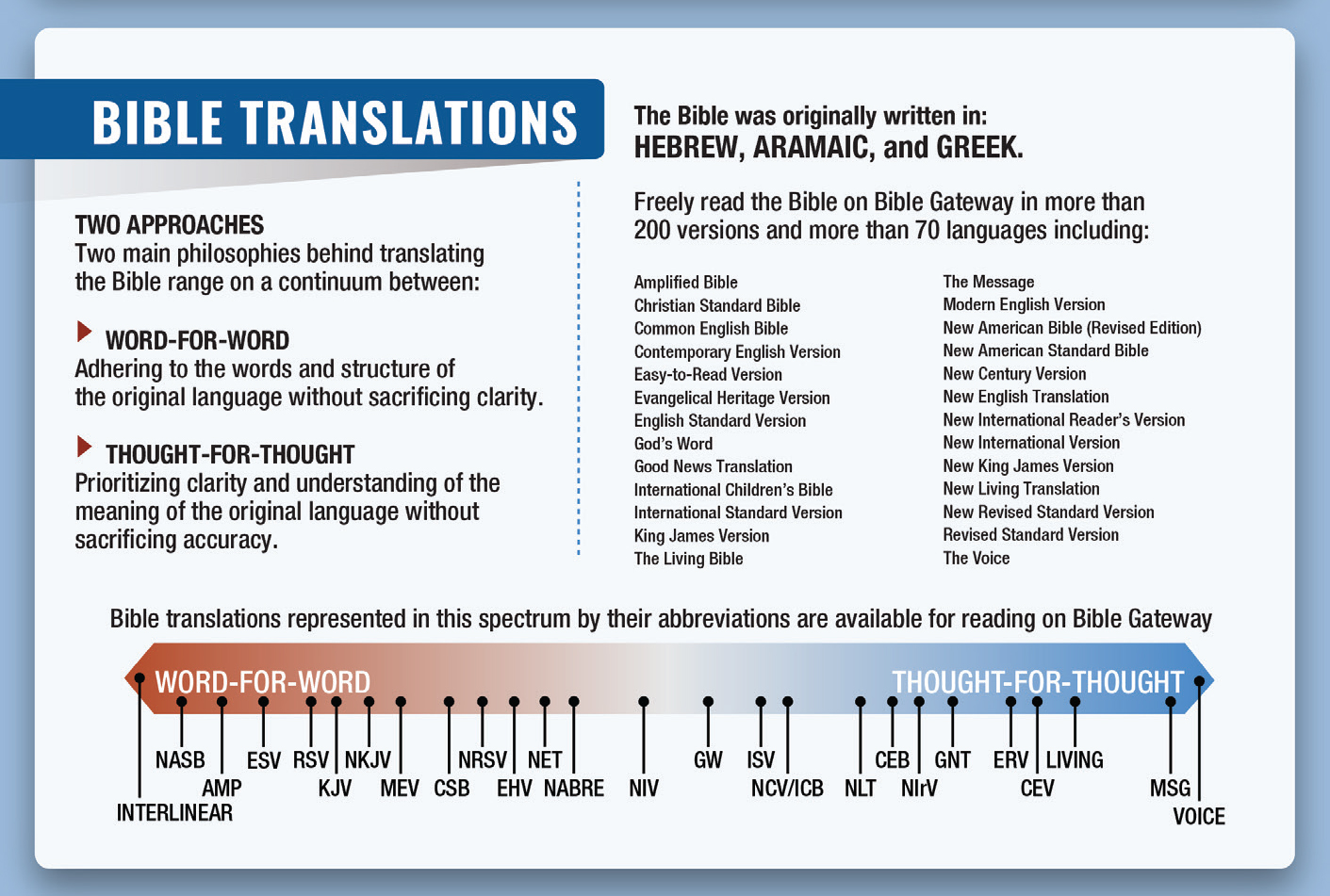 BIO: As the content director for She Reads Truth, He Reads Truth, and Kids Read Truth, John Greco (@johngrecowrites) has the best job in the world. He wakes up every morning hardly believing he actually gets paid to study Scripture and write about it. He is the author of Gospel Here and Now: Your Life in the Story of God, Manger King: Meditations on Christmas and the Gospel of Hope, and Broken Vows: Divorce and the Goodness of God. John and his wife, Laurin, live south of Nashville, where they daily wrangle their three small boys and dream of someday being the ones who get to take all the naps.

Get biblically wise and spiritually fit by becoming a member of Bible Gateway Plus. Try it free right now!