Blog / Can Science Explain All the Complexities of Our World?

Can Science Explain All the Complexities of Our World? 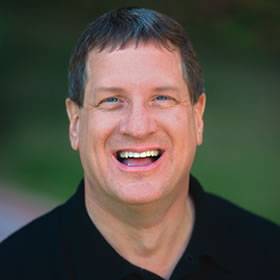 Who has measured the waters in the hollow of his hand, or
with the breadth of his hand marked off the heavens?
—Isaiah 40:12

Allan Rex Sandage, the greatest observational cosmologist in the world—who deciphered the secrets of the stars, plumbed the mysteries of quasars, revealed the age of globular clusters, pinpointed the distances of remote galaxies, and quantified the universe’s expansion through his work at the Mount Wilson and Palomar observatories—prepared to step onto the conference platform.

[Sign up for the free email newsletter, Investigating Faith with Lee Strobel]

[Read the Bible Gateway Blog post, The Case for Christ: An Interview with Lee Strobel]

As he approached the stage at this conference on science and religion, there was little doubt where he would sit. The discussion would be about the origin of the universe, and the panel would be divided among those scientists who believed in God and those who didn’t, with each faction sitting on its own side of the stage.

Many of the attenders probably knew the ethnically Jewish Sandage had been a virtual atheist even as a child. Others undoubtedly believed that a scientist of his stature must surely be skeptical about God. As Newsweek put it, “The more deeply scientists see into the secrets of the universe, you’d expect, the more God would fade away from their hearts and minds.” So Sandage’s seat among the doubters seemed a given.

[Read the Bible Gateway Blog post, Would You Believe a Healing Miracle Caught on Tape?] 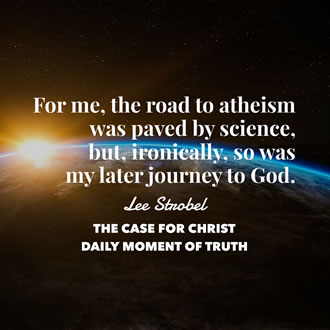 Then the unexpected happened. Sandage set the room abuzz by turning and taking a chair among the theists. Even more dazzling, in the context of a talk about the big bang and its philosophical implications, he disclosed publicly that he had become a Christian at age 50.

The big bang, he told the rapt audience, was a supernatural event that cannot be explained within the realm of physics as we know it. Science has taken us to the first event, but it can’t take us back to the first cause. The sudden emergence of matter, space, time, and energy pointed to the need for some kind of transcendence.

[Read the Bible Gateway Blog post, Never Give Up Praying]

“It is my science that drove me to the conclusion that the world is much more complicated than can be explained by science,” he later told a reporter. “It was only through the supernatural that I can understand the mystery of existence.”

[Read the Bible Gateway Blog post, Was Jesus’ Death on the Cross Faked?]

For me, the road to atheism was paved by science, but, ironically, so was my later journey to God. Good information, I am convinced, points us to a good God.

[Sign up for the free email newsletter, Investigating Faith with Lee Strobel]
________ 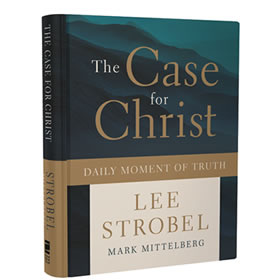 Taken from The Case For Christ Daily Moment Of Truth by Lee Strobel and Mark Mittelberg. Click here to learn more about this title.

Why do we believe what we believe? The Case for Christ Daily Moment of Truth, by leading apologists for Christianity Lee Strobel and Mark Mittelberg, offers fact-based, intelligent devotions to build a foundational faith. These 180 insightful writings will strengthen your spiritual knowledge and touch your heart with life-changing truth.

Each devotion is based on a scientific, historical, or biblical fact that will bolster your confidence in Christ. You will be inspired, encouraged, and equipped. A reflection at the end of each entry allows you to consider this new knowledge and how to put it into action.

In these thoughtful devotions, Strobel and Mittelberg articulate the reasons why Christians believe what they believe. Combining the authors’ expertise in apologetics with scriptural application for daily living, this devotional will leave you deeply encouraged and well informed. Topics range from scientific discoveries to theological explanations, and each devotion is followed by a brief reflection, prayer, and thought to meditate on and talk about.

You’ll emerge with a deeper understanding of your beliefs. In the process, you’ll find your love of truth—and your passion to share it—growing each day.

Lee Strobel was the award-winning legal editor of The Chicago Tribune and is the bestselling author of The Case for Miracles, The Case for Christ, The Case for Faith, The Case for a Creator, and The Case for Grace. With a journalism degree from the University of Missouri and a Master of Studies in Law degree from Yale, Lee has won four awards for publishing excellence and coauthored the Christian Book of the Year. He serves as Professor of Christian Thought at Houston Baptist University. Learn more at leestrobel.com. 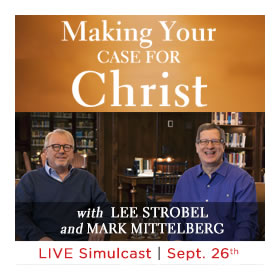 Are Ready To Make Your Case For Christ?

Join bestselling author and leading apologist, Lee Strobel along with author and evangelism trainer, Mark Mittelberg for a LIVE or On-Demand Simulcast Event and 6-Week Training Course that will equip you, your small group, or your whole church to share the gospel with confidence!

Making Your Case for Christ is designed to help Christians, both young and old, understand and articulate the message of Christ along with evidence that backs up his claims and credentials. The training course will combine high points of the historical apologetics presented in The Case for Christ book and movie with specific evangelistic training related to this information.

Don’t miss this amazing opportunity! Live simulcast is September 26th but can be viewed on-demand through December 26th. The Making Your Case For Christ Training Course Kit with everything you need is included, along with FREE access to the six online video training sessions in case you have multiple groups or church campuses that need to view the video sessions. Sign-up today!