Blog / The Bible’s Most Outrageous Claims

The Bible’s Most Outrageous Claims 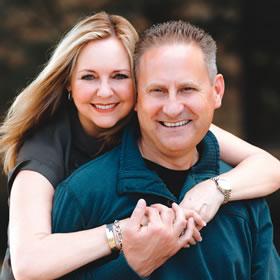 By Steve & Jackie Green (founding family, Museum of the Bible)

[Read the Bible Gateway Blog post, How Has the Bible Shaped Our World?: An Interview with Steve Green]

In 2013, a new miniseries ran on cable TV’s History Channel. It was the most watched entertainment program of the entire year on cable. The name of the program?

Over 13 million viewers tuned in for the series debut. Each week, viewership increased by 14 percent as the miniseries averaged 11.7 million viewers. So people in America find the Bible interesting.

That same year, evangelical faith and culture research group Barna ran a study asking what people thought about the Bible. Though this represents a mere snapshot in our ever-changing society, with these statistics changing every year, let’s look at a few highlights from the study to get a bead on what people think about the Bible in the 21st century.

They discovered that 80 percent of Americans consider the Bible to be holy. Fifty-six percent of Americans believe the Bible has too little influence in today’s society. Thirty-one percent of Americans admitted their faith influences their voting “a great deal.” People who read the Bible are more likely to give to charity. Forty-seven percent strongly agree that the Bible contains everything a person needs to know to live a meaningful life. Seventy-four percent of Bible readers strongly agree that reading the Bible makes a person more thankful. What were people’s favorite book of the Bible? Psalms, by a long shot. Have we gone totally digital in our Bible reading preference? No doubt this number continues to change, but in 2013, nine out of ten people preferred a hard copy of the Bible over a digital copy.

First, it says it is the Word of God. In the Old Testament book of Nehemiah, chapter 8, we’re told the law of Moses was read, and in verse 8 it claims it is the law of God. In the book of Joshua, it says, “Joshua said to the Israelites, ‘Come here and listen to the words of the Lord your God’” (Josh. 3:9).

David, the writer of Psalm 1, writes this interesting promise:

Blessed is the one
who does not walk in step with the wicked
or stand in the way that sinners take
or sit in the company of mockers,
but whose delight is in the law of the Lord,
and who meditates on his law day and night.
That person is like a tree planted by streams of water,
which yields its fruit in season
and whose leaf does not wither—whatever
they do prospers.
—PSALM 1:1–3

To claim that “whatever they do prospers” is a bold promise in and of itself, but notice it is for those who delight in the “law of the Lord.” You could argue that the writer is specifically speaking of the law of Moses, which is, as we previously noted, the first five books of the Bible. But we believe that the phrase has a larger meaning and that it applies to the Bible as a whole.

Second, the Bible claims that it is going to last forever; it is literally unchanging. In Psalm 119, it says, “Forever, O Lord, your word is firmly fixed in the heavens” (v. 89 ESV); in Isaiah 40, it says, “The grass withers, the flower fades, but the word of our God will stand forever” (v. 8 ESV); and in Luke 21, Jesus says, “Heaven and earth will pass away, but my words will not pass away” (v. 33 ESV).

Imagine making either of these claims today. You write something and claim that it is God’s Word or that it will last forever, and see what kind of response you get. Yet the Bible claims just that. 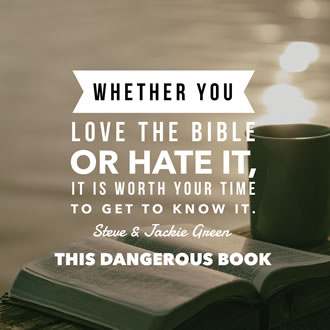 In the apostle Peter’s second letter, he makes the claim that God inspired the writers of the Bible through the Holy Spirit. Peter writes, “No prophecy of Scripture comes from someone’s own interpretation. For no prophecy was ever produced by the will of man, but men spoke from God as they were carried along by the Holy Spirit” (2 Peter 1:20–21 ESV).

The apostle Paul agrees: “Every scripture inspired of God is also profitable for teaching, for reproof, for correction, for instruction which is in righteousness” (2 Timothy 3:16 ASV). In the New International Version, that same passage reads, “All Scripture is God-breathed,” which is another way to say it is inspired by God himself. That’s a pretty hefty statement.

Another claim, which may be the most outrageous, comes to us from the fourth chapter of Hebrews, where it says the Word of God is “living and active” (v. 12 ESV). That’s an incredible claim. It’s a book. How can you say it is living? The German reformer Martin Luther writes, “The Bible is alive, it speaks to me; it has feet, it runs after me; it has hands, it lays hold of me.” How can a book make such an outrageous claim and be taken seriously, much less become the bestselling book of all time? These simple facts make it more intriguing and worthy of being studied.

What is its history?

How did we get it?

Is it true or a fairy tale?

What impact has it had?

Why has this book had the impact it has?

What story does the book tell?

There are many who maintain strong feelings about this book. It is loved and it is hated. Over time, people have died defending it, and there are those who have hated it enough to kill those defending it. How could a book, and the beliefs and faith associated with the book, incite this much devotion and hatred, all at the same time? What does that say about the human condition? Could it be that the Bible helps us understand our condition and the internal struggle for meaning and purpose?

Whether you love it or hate it, it is worth your time to get to know it. And many great thinkers and leaders throughout history have done so. 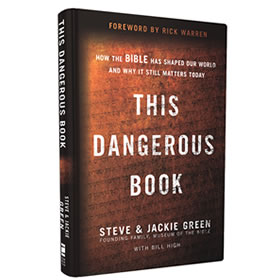 Taken from This Dangerous Book: How The Bible Has Shaped Our World and Why It Still Matters Today by Steve & Jackie Green. Click here to learn more about this title.

It is the top selling book in history. It brings social upheaval, international arguments, and political controversy. It has been used to justify both love and war. And for generations, it has found its way into the hearts of millions, offering comfort, direction, and life-changing truths.

How could one book have such power? In This Dangerous Book, Steve and Jackie Green explore the incredible history and impact of the Bible. As the founders and visionaries of the Museum of the Bible in Washington, DC, the Greens have a unique perspective on the Bible’s journey—from its ancient beginnings, to its effect on the moral fiber of nations, to its transformative influence in individual hearts.

The Greens share the challenges they have faced in acquiring biblical artifacts from around the world and why generations—in every time period and in every geographical location—have risked their lives to preserve this precious book.

Exploring ancient tablets, medieval commentaries, and modern translations, This Dangerous Book offers fascinating insight into the miracles and martyrdoms that have led to the Scriptures we read today. The Greens explore how cutting-edge technology gives new insight into the authenticity of the Bible, including the work of 50 scholars who recently uncovered hidden details about 13 unpublished Dead Sea Scroll fragments. This Dangerous Book also looks at the link between the Hebrew Bible and the New Testament, what we can learn from how the Bible was passed down to us, and why God’s Word is foundational to America’s past and crucial for its future.

The Bible is a world-changer and a heart-changer. Whether you have read the Bible for years or are simply curious about its influence, This Dangerous Book could change your heart as well.

Steve Green is President of Hobby Lobby, the largest privately owned arts and crafts retailer in the world.

He and his wife Jackie are part of the founding family of the Museum of the Bible, the largest international museum in the world devoted solely to the presentation and the preservation of the Bible. This facility, located in the heart of Washington, DC, is opening its doors in November of 2017. Steve and Jackie provide unique insight and commentary into the Bible’s role in our public and personal life. Since 2009 they have collected biblical artifacts from around the globe and today possess one of the largest collections in the world.

Jackie Green, co-founder of Museum of the Bible, is a full-time homemaker who relishes her roles of wife, mother to six children, mother-in-law, and “Gigi” to four grandchildren.

Married to her high-school sweetheart, Steve, Jackie actively supports him in his high-profile role as president of Hobby Lobby and chairman of the board of Museum of the Bible. An adoptive mom, Jackie served on the Advisory Board of a local Crisis Pregnancy Center and has worked with her family in orphanages worldwide. Although she is a world traveler, her favorite place is with her family.

Get to know your Bible better! Try Bible Gateway Plus today!

Filed under Books, Guest Post, Introduction to the Bible, The Bible