Bible Prophecy and Current Events: An Interview with Charles Dyer and Mark Tobey

What does Bible prophecy foretell about the current news in the Middle East? Major conflicts seem to arise out of nowhere to threaten world stability. What’s the connection between the Bible and real-time events, and how does Scripture provide comfort in such a time?

What’s the meaning of your book’s title?

Charles Dyer: Our title draws on Jesus’ description of the period preceding his return as a time when “nation will rise against nation, and kingdom against kingdom” (Matthew 24:7). The end times will, in fact, be a “clash of kingdoms.”

Why do you begin your book with verses from Ephesians 5:15-16?

Mark Tobey: We start here because we’re convinced the ultimate clash of kingdoms is between powers we cannot see. And as Christians, we have a responsibility as well as the supernatural enablement to represent the kingdom of God visibly in the way we live, walk, and apply our faith in Christ—especially in “evil times.” 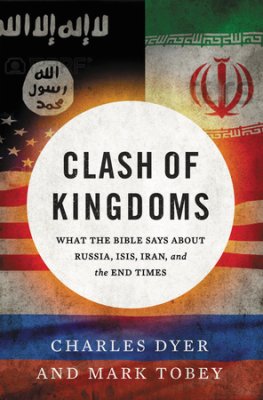 How can the Bible, which was written millennia ago by a variety of authors in diverse ancient cultures, have applicable things to say about the problems of 21st century readers?

Charles Dyer: The Bible can speak to today’s issues because God is the Bible’s ultimate author. Prophets were “men moved by the Holy Spirit [who] spoke from God” (1 Peter 1:21). And God said he would announce “the events that are going to take place” (Isaiah 44:7). From the fragmentation of Europe (Daniel 2:41–43), to the growing threat of Russia and Iran (Ezekiel 38:2–6), to the conflict over Israel and Jerusalem (Zechariah 12:2–3), to the ultimate spiritual conflict in the heavens, God provided a blueprint of how events will unfold leading up to the return of Jesus.

Why do you focus your writing on the Bible books Ezekiel and Daniel?

Charles Dyer: We actually focus on more than Ezekiel and Daniel in the book, but these two prophets describe the rise of two key coalitions connected with the end times—alliances that now appear to be coalescing in the Middle East and Europe.

How can knowing what the Bible says about the future help Christians in their daily lives?

Mark Tobey: First, prophecy assures us that God is in control. David in Psalm 11 asked, “When the foundations of the earth crumble, what shall the righteous do?” That’s a powerful question. He spends the remainder of his Psalm making clear that his confidence was in the Lord who “is in his holy Temple…and still rules from heaven” (Psalm 11:3-4). Second, prophecy compels us to live our lives with a certain urgency for the gospel and hope for our eternal destiny with God (1 Thessalonians 4:13-18).

What is the principle of God and kingdoms you write about?

Mark Tobey: The major theme of kings and kingdoms is a powerful hermeneutic for understanding the message of Scripture as a whole. God’s kingdom of righteousness is instituted at creation (even prior to creation), challenged by Satan almost immediately (the kingdom of evil), and remains in conflict with humanity’s embracing of rebellion straight through to the end of time (2 Corinthians 4:4). Ultimately, the kingdom of righteousness will be eternally established by Christ at his second coming. God reveals himself from Genesis to Revelation in the context of his relationship to earthly kings and their respective kingdoms, but ultimately reveals in Jesus the kingdom of heaven through the Incarnation (John 12:31; 18:36).

What does the Bible teach about the Antichrist?

Charles Dyer: He’s a real person. He will rise to control a military juggernaut centered in an ethnically divided Europe (Daniel 2:40–43; Revelation 13:2–4). He will make—then break—a seven-year treaty with Israel (Daniel 9:27; Matthew 24:15–16). He will be empowered by Satan himself (Revelation 13:2). And he will be defeated by Jesus at his Second Coming (Revelation 19:11–20).

What do you mean “the Bible makes it clear that confrontation precedes the coronation”??

Mark Tobey: Before Jesus returns as king, the nations of the earth will clash violently, first against one another (Psalm 2) and then together against Israel. We explain in Clash of Kingdoms how prophecy points to all of that. And Jesus predicted this international upheaval prior to his return as a time when there will be “wars and rumors of wars” and a period when “nation will rise against nation, and kingdom against kingdom” (Matthew 24:6-17).

Charles Dyer: I appreciate Bible Gateway’s wealth of resources. Besides using it to compare multiple translations of a passage, I also enjoy reading the Verse of the Day and exploring the practical tips on Scripture Engagement.

Mark Tobey: I agree with Charlie that Bible Gateway is an excellent resource for any serious Bible student and especially for busy pastors and lay ministry leaders.

Charles Dyer: God has not told us everything about the future. But he’s told us enough to help keep us on target spiritually. Revelation 1:3 is a good reminder of the importance of prophecy: “Blessed is he who reads and those who hear the words of the prophecy, and heed the things which are written in it; for the time is near.”

Mark Tobey: Yes, we’re so serious about this message that we’ve made available both small group discussion questions and sermon starters to align as a series to pastors and churches. This is a perfect time and opportunity to engage God’s people with the Word of God and get them into the Scriptures. You can visit www.clashofkingdomsbook.com for more information and to download the material.

Bio: Charles Dyer, PhD, was provost and dean of education at Moody Bible Institute before becoming professor-at-large of Bible at Moody and host of The Land and the Book radio program. He serves as associate pastor of Grace Bible Church in Sun City, Arizona, where he lives with his wife, Kathy.

Mark Tobey is a pastor, writer, and freelance editor and is the co-author with Charles Dyer of The Isis Crisis and Strike the Dragon. He serves on staff at Insight for Living Ministries and lives with his wife, Tracy, and four children in the Dallas area.