Blog / The State of the Bible 2018: Five Types of Bible Readers

The State of the Bible 2018: Five Types of Bible Readers

The State of the Bible 2018 research—commissioned by American Bible Society (@americanbible) and conducted by Barna Group (@barnagroup)—reveals trends in how often Americans are reading the Bible, their perceptions around the Bible, and how much impact the Bible has on their choices, relationships, and lives overall.

We’ll unpack the research in the weeks ahead.

To begin, here are the five categories in which the survey takers are placed in the report:

Most do not have children under 18 at home. Four out of five Bible Centered adults (80%) use the Bible every day, while the remainder read it several times a week (16%) or once a week (3%). 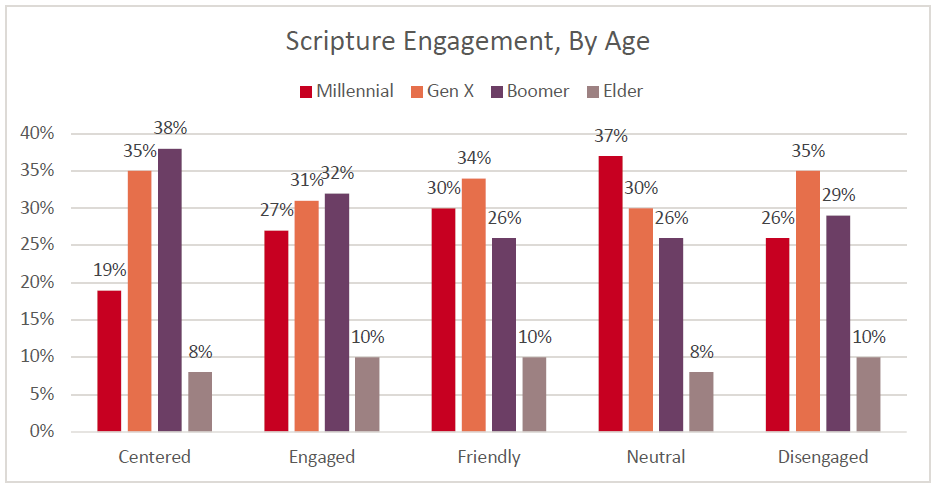 [Read Bible Gateway Blog posts that Introduce You to the Bible]

Bible Engaged (17% of the population) On average, Bible Engaged adults are 4 years younger than those who are Centered, at 47 years old. Like Bible Centered adults, Engaged

More women than men are in the Engaged category. Three in 10 Engaged adults (30%) use the Bible every day, and another 59% read it at least weekly.

Bible Friendly (15% of adults) Adults in this category average 44 years of age. Men are just as likely as women to be in this group, and they’re just as likely to be married as they are single. Half are non-practicing Christians, that is, they call themselves Christian but either don’t attend church at least once a month or don’t consider their faith very important. They’re just as likely to attend a Catholic church as they are a Protestant church. Just under half (47%) attend church weekly. While only 8% use the Bible every day, just under half use it once a week (47%), compared to 21% who use it monthly, and 24% who use it at least once a year.

Bible Neutral (5% of adults) interact with the Bible sporadically. More than half (55%) use the Bible at least three or four times a year, 23% use it once a month, and the remaining 21% use it at least one a week or more. They’re younger than other engagement segments, with an average age of 38 and more likely to be men than women. Two-thirds are not practicing Christians, and another one in six (16%) are non-Christians or aren’t affiliated with any faith group. While 42% attend church weekly, more than one-third are unchurched (38%).

The average age is on par with Bible Engaged adults at 46. Bible Disengaged are more likely to be

[Read the Bible Gateway Blog post, The State of the Bible 2018: Technology and Behavior]

Engage with the Bible by becoming a member of Bible Gateway Plus. Try it right now!