Blog / The Staggering Picture of Christian Persecution: An Interview with Johnnie Moore

The Staggering Picture of Christian Persecution: An Interview with Johnnie Moore

Is your perspective on the state of the church worldwide too comfortable? What do you think when you hear about the astonishing escalation in Christian persecution in the 21st century? What should you be doing about it?

Bible Gateway interviewed Johnnie Moore (@JohnnieM) about his book, The Martyr’s Oath: Living for the Jesus They’re Willing to Die For (Tyndale House, 2017). 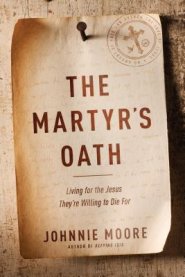 [Read the Bible Gateway Blog post, Bible Verses for the International Days of Prayer for the Persecuted Church: Nov. 5 & 12, 2017]

Johnnie Moore: “Staggering”—that’s a good word! The stories in The Martyr’s Oath will stagger you, for sure.

Like the Syrian refugees I met who’d converted to Christianity upon arriving in a neighboring country. Word got back to a jihadist family member still in Syria. He wrote them a letter saying “If you don’t return to Islam I will find you and crucify you.”

The family wrote him back, “We will not leave Jesus, and we are happy to die for him but please don’t crucify us. We are not worthy to die as our savior died.”

Stop and think about that: they’re so willing to die for him, and we struggle so hard to live for him!

A thousand such incidents happen every week!

We’re experiencing the most significant moment of Christian persecution since the first century. We’re literally witnessing 1st century persecution in the 21st century. Pope Francis has said there are more martyrs today than at any other moment, and the persecution isn’t just isolated to a few countries, but more than 60 countries.

The numbers are overwhelming, but I wrote The Martyr’s Oath to get beyond the numbers to the lives of those effected—our forgotten brothers and sisters. Believers like Rose, whose husband and children were beheaded in front of her eyes by terrorists in Nigeria; and as the terrorists chased Rose, they demanded she convert by repeating “Allah Akbar,” but she replied to them every time by screaming “Jesus!” She’s a little lady who’s been through so much—she lost everything—yet she didn’t lose her love for Jesus.

We’re missing the power of our faith, and I’m convinced we’ll only find it through the lives of these dear people. Most Christians will never be able to meet them as I have; so, I’ve decided to document their stories for the greater church.

How do Christians in America deny Jesus?

Johnnie Moore: When a terrorist or a government official demands that you deny Jesus, they’re demanding you exchange your belief in him for something else. In America, we don’t need a terrorist or autocrat to make any such demands. We do it to ourselves all the time with whatever we value above Jesus; whatever pseudo god we put our faith in.

See, I have this conviction that you cannot actually experienced a full Christian life unless you’re being persecuted or are close to those who are. There are so many secrets of the Christian life, and so many miracles that are only accessed when your faith costs you something or costs something for someone whom you care about.

In the end, despite all the help I’ve given to persecuted Christians, I’ve always found that I’m the one who’s been helped the most. Their faith has—again and again—helped me find my own again.

We’ll never experience full Christian discipleship if we aren’t persecuted or if we aren’t praying for, praying with, and living alongside those who are.

I AM A FOLLOWER OF JESUS. I believe he lived and walked among us, was crucified for our sins, and was raised from the dead, according to the Scriptures. I believe he is the King of the earth, who will come back for his church.

As he has given his life for me, so I am willing to give my life for him. I will use every breath I possess to boldly proclaim his gospel. Whether in abundance or need, in safety or peril, in peace or distress, I will not—I cannot—keep quiet. His unfailing love is better than life, and his grace compels me to speak his name even if his name costs me everything. Even in the face of death, I will not deny him. And should shadow and darkness encroach upon me, I will not fear, for I know though persecution may come, I know my battle is not against flesh but against the forces of evil. I will not hate those whom God has called me to love. Therefore, I will forgive when ridiculed, show mercy when struck, and love when hated. I will clothe myself with meekness and kindness so those around me may see the face of Jesus reflected in me, especially if they abuse me.

I have taken up my cross; I have laid everything else down. I know my faith could cost me my life, but I will follow and love Jesus until the end, whenever and however that end may come. Should I die for Jesus, I confess that my death is not to achieve salvation but in gratitude for the grace I’ve already received. I will not die to earn my reward in heaven, but because Jesus has already given me the ultimate reward in the forgiveness of my sins and the salvation of my soul.

For me to live is Christ; for me to die is gain. 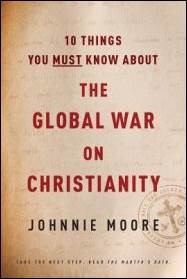 In practical terms, how should Christians pray for and help the persecuted church?

Johnnie Moore: Every day ask God to do these things for your persecuted brothers and sisters: provide for them, protect them, and grant them the ability to persevere. You’ll start to pray with more depth when you better educate yourself on what’s happening around the world. A good start is the companion pamphlet to The Martyr’s Oath which is called The Ten Things you Need to Know about the Global War on Christianity. It has all the practical information you need.

How do persecuted Christians around the world feel toward the Bible?

Johnnie Moore: It’s their life and their most cherished possession. It’s their hope and their help. It’s God’s literal words and it helps them press on.

Explain the subtitle of your book, Living for the Jesus They’re Willing to Die For.

Johnnie Moore: It comes from a question that suddenly appeared in my heart after I witnessed 2,000 Bible school graduates take a martyrs oath. The Holy Spirit seemed to whisper to me, “If we worship the same Jesus and have the same Bible, then why do we struggle so hard to live for a Jesus that they’re so willing to die for?”

That question has shaped the last ten years of my spiritual journey. It’s caused me to search my heart again and again. I hope it has the effect on others, through The Martyr’s Oath, that it’s had on me.

How should Christians strengthen themselves to be prepared for persecution and to not let fear overtake their faith?

Johnnie Moore: I believe God gives us special grace to help us in moments of persecution. But I also believe he often uses his own words deposited in our hearts. We “must not live on bread alone but on every word that comes from the mouth of God.”

What are lessons to be learned from persecuted Christians forgiving their tormentors?

Johnnie Moore: Jesus’ forgiveness of our sins is the single most impactful part of the gospel, and when we forgive others who sin against us we’re shining his light most brilliantly. Every act of forgiveness brings a touch of Heaven to Earth, and it makes the gospel look as otherworldly and supernatural as it is.

Forgiveness is constructed in the DNA of the persecuted. One Egyptian pastor this spring delivered a sermon titled, “A Message to Those Who Kill Us.” In it he quoted Jesus, declaring the fact that the church would refuse to hate the terrorists, but would instead forgive them, pray for them, and love them. This is one of the reasons why so many terrorists are coming to Jesus.

Johnnie Moore: When I was 12 years old I selected a verse as my life verse, and I write it every time I sign a copy of one of my books. The verse is 2 Corinthians 12:9 which says, “My grace is sufficient for you for my strength is made perfect in your weakness.”

Johnnie Moore: I’m so grateful to God for Bible Gateway. I’ve used it almost every day for my entire adult life. It’s a gift to the church.

Bio: Johnnie Moore is an author and humanitarian whose adventures have taken him to more than two-dozen nations. He’s worked with genocide victims in Bosnia and Rwanda, established a sustainable agricultural project in Zimbabwe, visited the world’s largest refugee camps, and on five occasions has worked in places that were later bombed by Islamic extremists. He founded The KAIROS Company after running public and media relations across multiple sectors including higher education, entertainment, business, and politics. He’s the author of The Martyr’s Oath, Dirty God: Jesus in the Trenches, Defying ISIS, What Am I Supposed To Do With My Life?, and other books.

Get biblically wise and spiritually fit with Bible Gateway Plus.