Blog / Why Are There Differences in the Gospels?: An Interview with Michael R. Licona

Why Are There Differences in the Gospels?: An Interview with Michael R. Licona

Why are the same events sometimes reported differently in the four Gospels? Should the biblical accounts be viewed as contradictory and unreliable? What were the intentions of the original writers centuries ago?

Bible Gateway interviewed Michael R. Licona (@MichaelLicona) about his book, Why Are There Differences in the Gospels?: What We Can Learn from Ancient Biography (Oxford University Press, 2017). 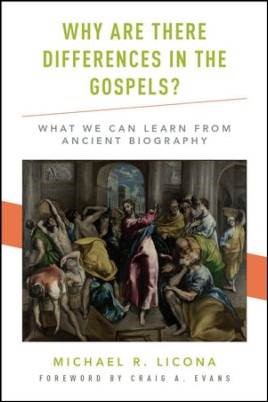 What is the issue your new book addresses?

Michael R. Licona: Anyone who has spent a reasonable amount of time reading the Gospels has observed the manner in which they report the same stories often differs to the point of apparent contradiction. This is perhaps the foremost objection to the historical reliability of the Gospels.

Evangelicals often attempt to harmonize the accounts. While harmonization can be a legitimate approach in some cases, when I read the Gospels in view of their biographical genre, I get the strong impression that harmonization is very often the wrong road to take and that the Gospel authors would have said, “No. Don’t do that, because the event did not occur as you’re proposing.” Why Are There Differences in the Gospels? takes a fresh look at the differences and seeks to discover what led to them.

What does harmonizing the Gospels mean and what do you see as a problem with this approach?

Michael R. Licona: By harmonization efforts, I mean the common practice of laying the parallel Gospel accounts on top of one another, similar to transparencies on an overhead projector. The objective of such efforts is to demonstrate that all of the details—even those appearing to be in conflict—actually fit together without much, if any, tension. Unfortunately, these efforts sometimes lead to subjecting the Gospels to a sort of hermeneutical waterboarding until they tell the exegete what he or she wants to hear.

Those performing strained harmonization are doing so for honorable reasons. They seek to have a high view of Scripture and believe their harmonization efforts are treating the Gospels with respect while rescuing them from skeptics who want to dismiss their contents.

How should the four Gospels be properly understood in light of the literary genre of Greco-Roman biography?

Michael R. Licona: The majority of New Testament scholars agree that, at minimum, the Gospels share much in common with the genre of Greco-Roman biography. Therefore, it should be of no surprise to observe the Gospel authors using the compositional devices that were part-and-parcel of that genre. In fact, we should be surprised if we did not observe it. Accordingly, gaining a better understanding of that genre should, in principle, yield a greater understanding of the Gospels for us.

So, what were the objectives of ancient authors and how did they write to achieve them? Did their techniques result in the type of differences we observe in the Gospels? As I conducted my research with the objective of answering these questions, I discovered that reading the Gospels in view of their biographical genre sheds light—sometimes a great deal of light—on numerous items that were not so clear previously.

Most evangelicals are willing to acknowledge that the Gospel authors used some compositional devices. For example, most agree that Matthew has compressed the story of Jesus cursing the fig tree and narrates it as though the fig tree withered and died the moment Jesus cursed it, whereas Mark narrates the story as though the withering probably took a little more time. But they usually only acknowledge the use of a compositional device when harmonization appears almost impossible.

Where I differ is, I place a priority on genre over harmonization. So, before seeking to harmonize Gospel texts, one should read the Gospels in view of their biographical genre, which includes their authors’ use of the various compositional devices commonly used when writing history and biography. Both of us see harmonization and compositional devices as solutions. Where we differ is which of these should be given priority.

Michael R. Licona: Well, I first observed how Plutarch reports the same stories in two or more of the biographies he wrote. I then assessed how the same author—Plutarch—told the same stories differently. Then I identified patterns of the differences. I then inferred compositional devices Plutarch likely employed that resulted in those differences.

I did not discover those compositional devices. In fact, classicists have for some time recognized their use in Greco-Roman literature. I just examined and assessed the differences in Plutarch’s extant biographies more than had been previously done. I then assessed numerous stories in the Gospels where their authors most likely used similar compositional devices. It was quite exciting to see the results!

What is literary spotlighting and how is it used in the Gospels?

Michael R. Licona: Imagine you’re at a theatrical performance and there are multiple actors on the stage. At one point, the lights go out and a spotlight shines on one of the actors. You know other actors are on the stage. But you can’t see them because the spotlight is focused on one person.

Literary spotlighting is when an author mentions only one person performing an action while being aware of several others who are present. Of all the compositional devices I observed being used by Plutarch, literary spotlighting was perhaps the most common.

There are occasions in the Gospels where literary spotlighting is likely at play. Take the resurrection narratives, for example. In Matthew and Mark, there is one angel at the tomb, whereas there are two in Luke and John. It seems likely to me that Mark, followed by Matthew, is shining his literary spotlight on the angel who announces that Jesus has been raised.

In all of the Synoptics, multiple women visit the tomb and discover it empty, whereas only Mary Magdalene is mentioned in John. It seems likely to me here as well that John is aware of the presence of other women while shining his spotlight on Mary. After all, he reports Mary announcing to Peter and the Beloved Disciple, “They have taken the Lord from the tomb and we don’t know where they have laid him” (John 20:2). Who’s the “we” to whom Mary refers? Probably the other women who were present. Then observe what happens next. In John, Peter and the Beloved Disciple run to the tomb and discover it empty, whereas Luke 24:12 mentions Peter running to the tomb and no mention is made of the Beloved Disciple. However, just 12 verses later, Luke reports there were more than one who had made the trip to the tomb. These observations strongly suggest Luke and John were employing literary spotlighting in their resurrection narratives.

As a Christian apologist, you regularly debate atheists. How should the average Christian respond to non-believers who question the historical veracity of the Gospels (and the Bible itself) and claim the books of the Bible are replete with errors and inconsistencies?

Michael R. Licona: My research did not include the Old Testament. So, I can only speak in reference to the Gospels. Why Are There Differences in the Gospels? does not build a case for the historical reliability of the Gospels. However, if what I’m suggesting in the book is correct—that an overwhelming number of Gospel differences are not only reasonably but also most plausibly accounted for by reading the Gospels in view of their biographical genre—the tensions resulting from nearly all of the differences disappear and arguing that the Gospels are historically unreliable in view of their differences is no longer sustainable.

That said, the historical reliability of the Gospels is the topic of my present research. Last year, Bart Ehrman and I had a lengthy written discussion on the matter. Those interested may read it at www.risenjesus.com/gospels.

What are your thoughts about Bible Gateway?

Michael R. Licona: Bible Gateway is a tremendous resource for Christians who desire to engage in Bible study. They can look-up a Bible text, do a word search, and find cross-references while having an almost endless number of translations in many languages available at their fingertips. It’s nothing short of a fantastic resource you provide and at no cost to those using it!

Tagged as Bible, gospels, harmony of the gospels