Blog / Like a Smartphone, the Life Application Study Bible Is Updated: An Interview with Ron Beers

Like a Smartphone, the Life Application Study Bible Is Updated: An Interview with Ron Beers

The phenomenally bestselling Life Application Study Bible (LASB), with its signature feature of 10,000 Life Application® verse notes, is now updated and expanded in a refreshed 3rd edition. Whether you’re new to the Bible or a lifelong reader, this study Bible includes clarifications that help you understand the language, advice on how to apply the Bible’s teaching to everyday life, descriptions of the context and setting, profiles of key Bible people, guides for finding what you’re looking for, and more.

[Read the Bible Gateway Blog post, New Edition of the Life Application Study Bible to Be Released in October]

How did the Life Application Study Bible originally come to be?

Ron Beers: The idea for the LASB was hatched back in the early 1980s. At that time there were just a handful of study Bibles on the market: The Ryrie Study Bible, The Scofield Study Bible, The Thompson Chain Reference Bible, and a few others. The notes in these Bibles were written by Bible scholars and, while they were loaded with lots of information and facts, there was no practical application. For example, one note I read said this, from Exodus 13:16: phylacteries, from a word meaning prayers or prayer cases. Now, that may be interesting information, but why did God put this verse about phylacteries in the Bible? He did it for a reason—what was that reason? I kept reading notes like this in those traditional study Bibles and asking, “So what?” “What does God want me to do because of this verse?” “What is he wanting to tell his people?” 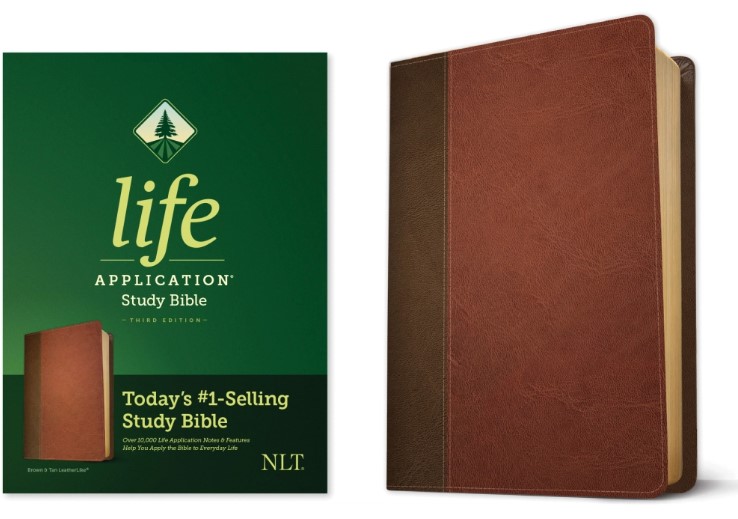 So it sent me on a search through all the available study Bibles on the market. I found study notes about Wormwood but no notes on Worry. I found notes on Phylacteries, but not a single note on Purpose or Priorities. I found notes on the town of Gozan but nothing on Goals. This research begged the question: If the Bible is supposed to be a blueprint for living, then there should be plenty of verses that show us how to live as a disciple of Jesus, how we can live transformed lives, how to bear much fruit (as Jesus put it). But not a single study Bible did this—there was lots of information, but no application.

I was fortunate enough (or I prefer to think of it as a divine appointment) to be working at Youth for Christ and right there in the headquarters offices were several people who shared this same passion for Bible application. It took us a year to carefully think through what an “application” Bible would look like, but we did it and several months later we had a contract with Tyndale House Publishers who caught the vision for how this could help people apply God’s Word to daily life. After six years of work the first edition of the LASB was published. Now, 30 years and 20 million copies later, the Life Application Study Bible (NLT website and NIV website) remains the bestselling study Bible in the world. I think God gave us a pretty good idea! I’m grateful we listened. 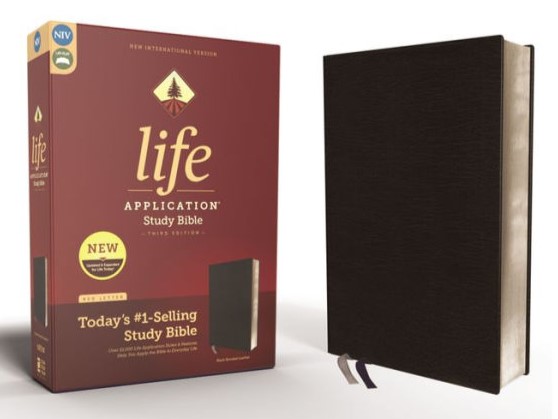 What was the original decision process in selecting which passages of Scripture would be associated with study notes?

Ron Beers: We approached the note selection process from several different angles: task forces of pastors and teachers working through each Bible book, but also asking people from all walks of life to just read through the Bible and write down any question that came to mind. We also decided right up front to tackle the toughest questions that come to the average person when they read the Bible and then to write notes and applications that showed how we can apply even those verses to our daily lives.

Why is it important that the original LASB editors were reassembled with a team of next generation female editors to produce this third edition?

Ron Beers: Linking the original writing team with millennial female Bible editors allowed us to fully utilize the expertise and experience of those who now had decades of experience writing Bible applications and then match that with the unique skills and perspective of next generation Bible experts who could offer valuable advice regarding the tone and sensitivities relevant to today’s culture. Many issues that are at the forefront of cultural discussion today were not being talked about when the original version of the LASB was published. The editors made sure these important issues were addressed, allowing this Bible to continue to be as relevant to today’s generation as it was to the generation in which it was originally published.

In what ways does the Third Edition of the LASB differ from the previous editions?

Ron Beers: Approximately 30-35% of the notes and features are completely new. And about 90% of all the notes and features were edited in some way. Applications are even stronger and more insightful. The notes reflect the latest scholarship. Today’s cultural issues are directly addressed. For those who already own a Life Application Study Bible, they’ll find it worthwhile to move to this new edition. I like to compare it to a smartphone upgrade. So if you own an iPhone™ 5 or 6, for example, it still functions well. But if you upgrade to the new iPhone™ 11, it offers so many new features, greater ease of use, and much additional power that you never thought possible. You won’t be disappointed.

Explain how the notes are written.

Ron Beers: Every study note has three key parts: the explanation, the bridge, and the application. The explanation is usually the first part of the note, and it always points the reader back to the Bible verse or verses being addressed. The point of any Study Bible is to point the spotlight on the Bible text, not the notes. The bridge is the core of the note, explaining how this Bible verse is relevant to our lives today. It answers the question, “So what?” The final part of the note is the application, which answers the question “Now what?” It provides practical suggestions and insights into how we can live out this timeless principle addressed in the Bible text.

Give an example of how a current issue in the Christian faith is handled in the notes about it in the LASB.

Ron Beers: Zephaniah 1:4-6 talks about how the Israelites’ worship of idols led them away from God and thus recognizing his guidance. Today we don’t worship idols of wood or stone, but we wrestle with “idols of technology.” The life application note bridges the gap between worshiping idols of wood and stone in ancient times to worshiping our cell phones, social media, and even our circle of friends, making the point that anything that takes first place in our lives is an idol and how important it is to recognize that. Only God can have first place in our life.

What challenges did you face in producing this Third Edition?

Ron Beers: Time and spiritual warfare. We all had other full-time jobs, but for a year we put in an additional 30-40 hours per week to meet our deadlines. We pretty much worked seven days a week for over a year. During that time we felt intense spiritual warfare: weird things happening to us and our families, an intense heaviness in our souls. This also happened when we first developed the LASB, so it wasn’t surprising to see it happening again. The Enemy doesn’t want God’s Word to be read and applied—not in any culture. After all, as Ephesians 6:12 says, we are “not fighting against flesh-and-blood enemies, but against evil rulers and authorities of the unseen world.”

Give an example of a difficult passage of Scripture for which notes are written to better understand it.

Ron Beers: Leviticus 13:47-59 is a difficult passage about how the Israelites were to treat contaminated (unclean) clothing. The LASB note reads:

Why is this passage in the Bible? So much of what we read in Leviticus is a picture that contrasts life for people in the old covenant (before Jesus came to earth) with life for people in the new covenant (after Jesus came). This picture helps to clarify what life in the new covenant is like. Today, no matter how good our deeds might be, they are contaminated by sin and are nothing but “filthy rags” before our holy God (Isaiah 64:6). Thus, we are all unclean because of sin. But being united with Christ is like “putting on new clothes” (Galatians 3:27). The righteousness of Christ covers us like new clothes and makes us clean before God, and therefore Jesus, our High Priest, looks at us as though we had never been contaminated by sin.

By the way, this is a new note not found in any previous edition of the LASB.

The LASB Third Edition is published in both the New Living Translation and the New International Version Bible texts. How do they differ from each other?

Ron Beers: I love God’s Word so much. It’s hard for me to pick one favorite. But I often go back to 1 Samuel 3:10 which says, “Speak, LORD, your servant is listening.” God had just called out to Samuel twice in the night. But Samuel doesn’t recognize God’s voice. Eli, the priest, has to tell him that the voice Samuel hears must be from God himself. When Samuel hears the Lord call him a third time, he says, “Speak, LORD, your servant is listening.”

How often do we push right through life without bothering to pause and listen for God? How many times has he called to me, but I failed to recognize his voice? How often do I pray and then fail to listen quietly for God’s answer? How often do I come to God with my own agenda instead of asking for his? If God has something to say to me, I don’t want to miss it, so this short verse is a reminder to me to be alert to God’s voice.

Ron Beers: Millions of people are indebted to whomever had the original vision for Bible Gateway. Having easy access to any verse of the Bible in multiple translations helps Bible study come alive. What a privilege for me to talk about a Study Bible on Bible Gateway!

Ron Beers: In these days when more and more people are questioning the accuracy and relevancy of the Bible, it’s been an honor to be able to work on the Life Application Study Bible because we believe it’ll be very helpful to readers to find the connection between the timeless principles of Scripture and the ever-present challenges of day-to-day living. God wants us to apply his Word to daily living, to put into practice what we’ve learned from studying the pages of the Bible. Our prayer is that this Bible will help people do that.

Bio: Ron Beers has worked at Tyndale House Publishers since 1987, serving as editorial director for books and Bibles, as well as editor-in-chief; he currently serves as senior vice president and group publisher. He has written or co-written more than 30 books. Ron was involved in the creation of the Holy Bible, New Living Translation, and he has been a member of the Central Bible Translation Committee since 1988. Ron was also the creator and general editor of The Life Application Study Bible. He has been happily married since 1979 and has three grown children and one grandchild.

Study the Bible with confidence and convenience by becoming a member of Bible Gateway Plus. Try it right now!