An Interview with the Editors of The CEB Women’s Bible 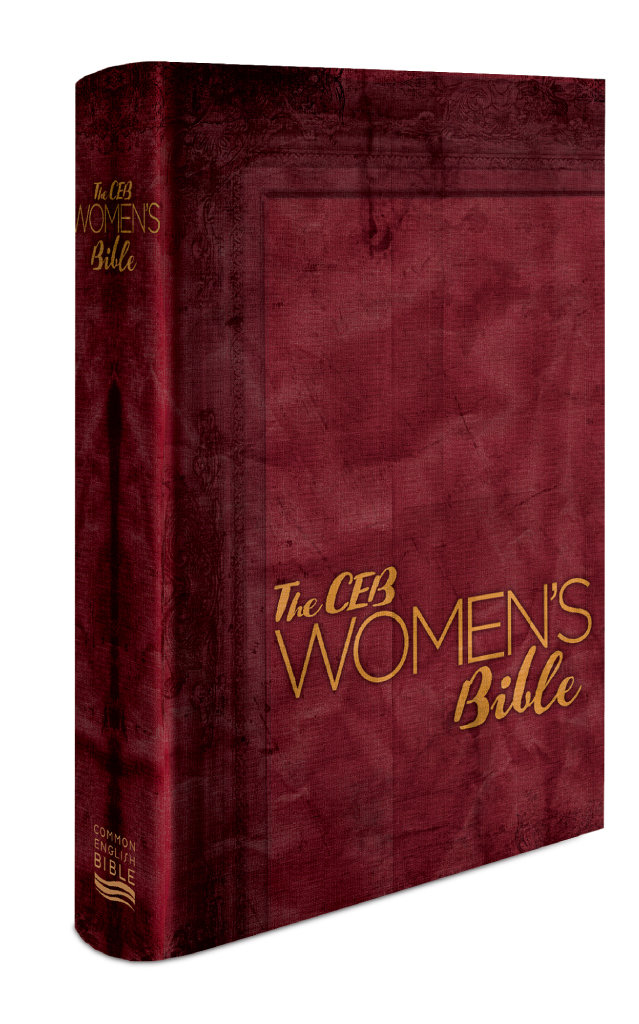 According to the Bible’s preface, “As we notice women in Scripture who had until now been invisible to us, we train our hearts to notice all of God’s people today. And as we seek guidance for our lives, examine our choices, and pour out our yearnings before God, this Bible invites us to ask what it means for us to be faithful in our time.” 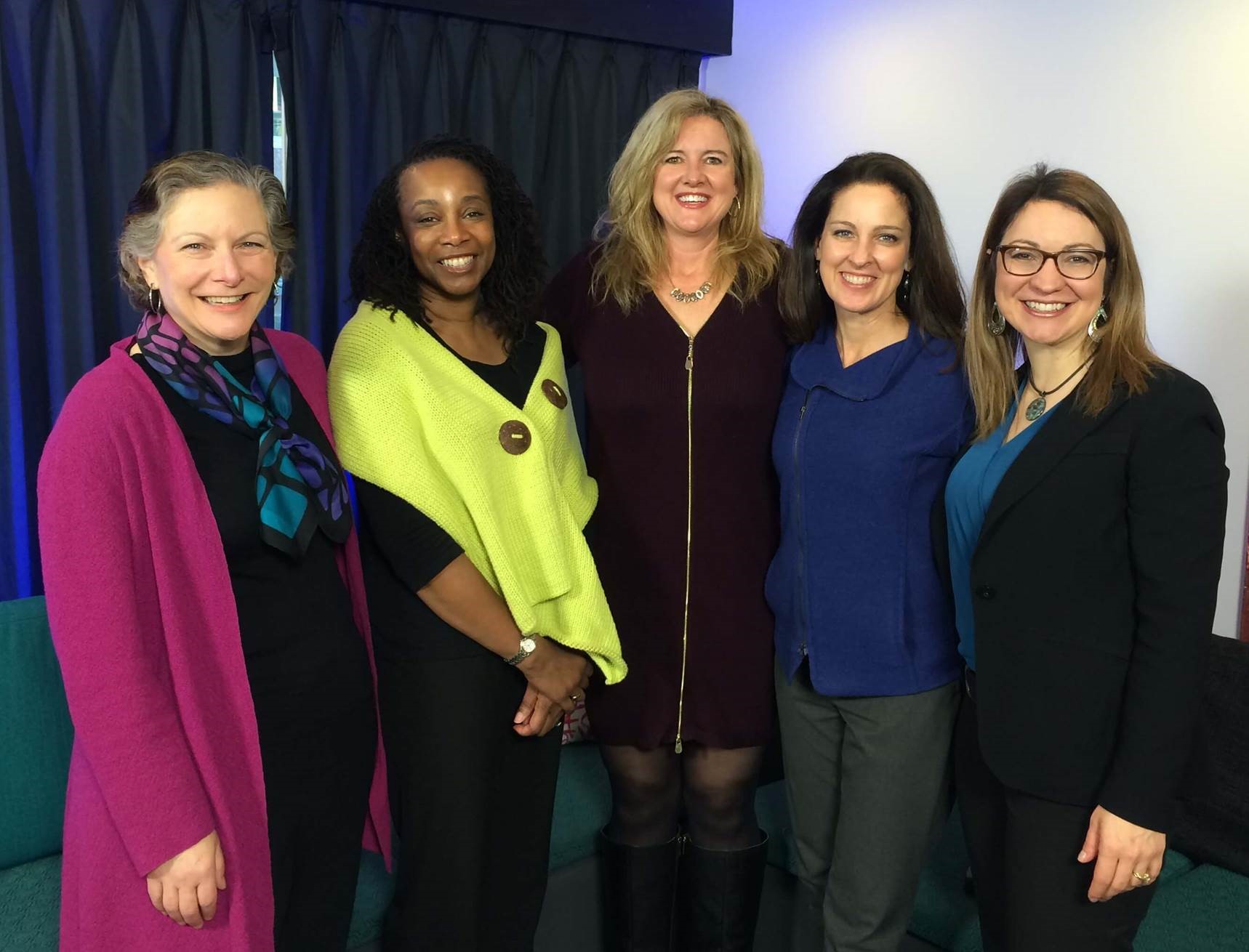 The CEB Women’s Bible Editorial Board left to right:

Explain what the Common English Bible (CEB) translation is.

The editors: The Common English Bible is a newer translation—the full Bible in the CEB was first published in 2011—that combines readability of the text with the reliability of translation work from leading biblical scholars. To ensure accuracy, the CEB uses inclusive language to refer to people and is a translation directly from the original languages. More than 120 scholars were involved with the translation, including many women, representing 22 denominations.

What need is The CEB Women’s Bible meeting?

Ginger Gaines-Cirelli: Beyond the novelty of employing only women’s voices in the compilation of devotional and study tools, we asked ourselves when we first began meeting about this project: What was the unique gift we could offer through this work?

Our conversation coalesced around a foundational affirmation: the variety of human voices, experiences, identities, and perspectives in the world is a God-given gift. That gift is reflected in the biblical text itself and in those of us who engage the text today. Therefore, The CEB Women’s Bible both expects and celebrates that people of every gender engage Scripture from their own perspectives—based on their own particularity of history and identity.

Rather than provide monolithic or ready-made answers for what it looks like to be a Christ-follower or a “Christian woman,” we want to invite folks into a dynamic conversation with Scripture and, ultimately, with God. The hope is that people will accept the invitation to enter into the “conversation” with their whole selves, to feel what they feel and think what they think, to wrestle and receive, to be challenged and comforted, to find their own voices through honest engagement with other voices that speak in and about the text.

Describe the women who contributed reference material for this Bible.

The editors: In addition to the five editors, 80 women—and only women—contributed to The CEB Women’s Bible. They’re scholars, clergywomen, lay leaders, and writers. All of us are deeply committed to the power of God’s living Word.

Why was it important that only women contributed content for this Bible?

Ginger Gaines-Cirelli: For years, biblical scholarship, commentary, and preaching were all in the voice and from the perspective of men. Much of that work is edifying and insightful, but some of it has contributed to the elevation of destructive forms of patriarchy.

Thankfully, extraordinary women scholars and pastors have emerged and contributed to the field as institutional and cultural shifts have occurred. For this project we were clear that all the content would be written by women. This is important, first of all, because it has never been done before. But, more than that, it’s important because the wisdom, insight, and skill of women pastors, writers, and scholars from across Christian traditions has been brought together into this rich resource and offered as a gift to people of all genders.

How is a woman’s perspective of the Bible different from a man’s?

Jaime Clark-Soles: It would overstate the case to claim there’s “a” woman’s perspective or “a” man’s perspective of the Bible. However, like it or not, women live their lives in a world that has specific assumptions and expectations about them and their bodies than it does for men. Women have to navigate that world as they attempt to discover their own true identity in relationship to the God of Scripture.

The Bible is written from a largely male perspective; women often have to take extra steps to make the texts apply to them. For instance, the Gospel of Matthew praises those who are “eunuchs because of the kingdom.” Eunuchs are castrated males. But women have worked by analogy to read this as a call to celibacy that they’ve answered over the centuries, despite society’s (including the church’s) message that motherhood is the pinnacle of womanhood.

Women as a whole have never had equal access to power and have thus always been more vulnerable; they’ve always been disproportionately poor and dependent on others for survival. Thus, they always read from the margins to some degree (though readings by women from different social locations will differ). I’d be willing to bet, though, that all women who read the story of the rape and dismemberment of the concubine will identify with the female in the story and share in common an immediate gut reaction related to the ever present awareness of the possibility of rape both in times of peace but especially in times of war. I imagine that a group of men reading the story would experience different emotions and ways of relating to the characters in it.

Questions of church leadership, politics, religion, gender, sexuality, economics, race, technology, and global forces still affect the fate of women differently than men. When negotiating moral issues such as sex trafficking, reproductive rights, end-of-life decisions, proper use of technology, pluralism, war, care for the least of these, the alien and sojourner in your land, women are affected differently. Thus, when studying Scripture in order to be spiritually formed and equipped to address such questions, women will bring their experience of living identified as female to the table; thank God. And when the voices of a wide diversity of women are heeded, we’ll be much closer to God’s will being done on earth as it is in heaven. “Happy is she who believed that the Lord would fulfill the promises he made to her.”

Explain what the profiles are in The CEB Women’s Bible.

The editors: Embedded throughout the text are almost 150 profiles of named and unnamed women in Scripture. Our goal was to draw attention to the people in the Bible who are often overlooked. By noticing the women in Scripture who had until now been invisible, our hearts are trained to notice all of God’s people today. The CEB Women’s Bible also includes an index of every woman in the Bible, named and unnamed. This is the only Bible that includes that valuable resource.

Is this Bible only for women or should men read it too?

Judy Fentress-Williams: As a professor, it’s my hope that all my students, male and female, will use The CEB Women’s Bible. When a study Bible has notes written by a majority of men, no one asks if women should read it. The assumption is that the notes will elucidate the text.

The presence of a Bible with notes written by women reminds us of the reality of context. Women and men read and respond to the Bible from their contexts, and gender is one of the elements contributing to their context. As a woman, I often do the work of translating a work contextually. In other words, I do the work of taking a perspective that is male and translating it to my perspective. I’d like for my male students to have exposure to a set of Bible notes that does not privilege a male perspective in the hope that it will not only expose them to different perspective, but that it will broaden their understanding of context and how gender plays a role in the way we hear and respond to the Bible. The contributors are all women, but their comments don’t focus on women exclusively. Many of the subjects that are considered “women’s issues,” such as miscarriage, affect men as well.

Give an example of a specific story in the Bible that’s brought into a new light in this Bible and that might be quickly passed over in other reference Bibles.

Rachel Buaghman: An example of the way this Bible lifts up women who are usually passed over is in the book of Esther. There are portraits written about women in the book of Esther such as Vashti and Zeresh. These are women I’ve honestly never given a second thought but, given this resource, I recognized the significance of their role.

What was a particularly difficult passage or book to bring a perspective to and why?

Rachel Buaghman: In 2 Samuel 13, the story of the rape and abuse of Tamar is horrifying because it’s a story that’s sadly relatable to many women. The articles written on abuse and rape by our authors can be found on pages 389 and 392, and I pray that these are writings that help the reader be aware of the reality of abuse and be willing to give voice to those who have been silenced.

Jaime Clark-Soles: The story of the Samaritan woman was a challenge because of the incorrect assumptions that people bring to the text due to their prior experience with it.

I’ve heard many a sermon about this “whore” who was forgiven by Jesus for her lasciviousness. This saddens me for two reasons. First, it’s a wrong interpretation of the passage. Nowhere is this woman referred to as a “whore” (porne) and nowhere is she forgiven (aphiemi). Second, the reader misses out on what the story is actually about—an exemplar of the faith whom we’re supposed to imitate: 1) she encounters Jesus and engages him in deep theological dialogue which leads to her having the first theophany (manifestation of God) in the Gospel; 2) she moves into her personal story of abundant life (marked by leaving her water jar behind) in Christ that awaits each and every one us; and 3) she immediately shares that abundance with others by testifying about him to others.

Ginger Gaines-Cirelli: There are plenty of passages of Scripture that are explicitly challenging for women—teachings that silence women, devalue women, ignore women. As an editor, it was a gift to read the varieties of ways that women engage these difficult texts with creativity, cultural sensitivity, strength, and skill. I was reminded of the fact that, as a woman, I always have to take extra steps of interpretation to discover my place within the story. As a writer, I enjoyed the challenge of writing profiles for women we know little to nothing about; women like Paul’s sister (Acts 23:16-22). It’s powerful to notice and honor these women who are so easily missed, but who certainly played a role in the ongoing drama of God’s love story in the world.

Is there a favorite passage that you’re especially drawn to in this Bible for its uniquely woman’s perspective?

Rachel Buaghman: I have so many that are favorites, but I’ll say that my favorite for today is from Psalm 103:13. The psalmist speaks of the love of God as the love of a parent with compassion for her child. The article included with that Psalm calls us to think of a mother’s love for a child carried in her womb. Thinking, praying, and loving from this perspective helps me experience God in a new way as I read this Psalm.

Jaime Clark-Soles: Joshua 2, the story of Rahab. I was delighted to view Rahab from the perspective of three different commentators: Wil Gafney, Christine Chakoian, and Christy Lynch. Each one of them gave me something different to consider about the story and the character. Just the fact that she’s important in so many different places in the Bible (such as Matthew 1:5, Hebrews 11:31, and James 2:25) as a paragon of faith and courage and acumen, makes her a fascinating character I want to ponder more.

Ginger Gaines-Cirelli: I don’t think there’s only one passage I would name. The project as a whole offers a wide range of women’s perspectives. Every time I open The CEB Women’s Bible, I’m grateful for the voices and vision of our contributors.