Blog / What is the “Unforgivable Sin”?

What is the “Unforgivable Sin”? 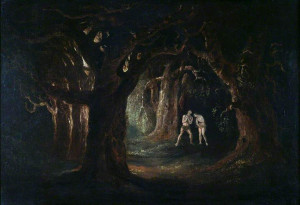 In one memorable New Testament scene, Jesus’ critics accuse him of being in league with the devil himself. In answering his critics, Jesus refers to something that has troubled Christians ever since: the so-called “unforgivable sin.”

“I promise you that any of the sinful things you say or do can be forgiven, no matter how terrible those things are. But if you speak against the Holy Spirit, you can never be forgiven. That sin will be held against you forever.” — Mark 3:28-29 (CEV)

Different Bible translations word this differently; some use the phrase “eternal sin” or “unforgivable sin.” In some, the sin is to “blaspheme against” or “curse the Holy Spirit.” Whatever the wording, what troubles many readers is the suggestion that there is a type of sin that God will not forgive. Doesn’t this contradict verses like 1 John 1:9, which state that God will forgive all of our wrongdoing? What exactly is the sin that can’t be forgiven—and is it possible that you’ve committed it, even unintentionally?

These are serious questions. For an answer, I turned to author and apologist Lee Strobel’s Investigating Faith newsletter, where earlier this year he published a thoughtful reflection on a difficult Bible passage. Here’s Lee’s response to the question.

What is the unforgivable sin, and how do I know I haven’t committed it?

“If you’re worried that you may be guilty of the unforgivable sin, you almost certainly are not,” Rick Cornish aptly points out in his book Five Minute Theologian. “Concern about committing it reveals the opposite attitude of what the sin is. Those who might be guilty wouldn’t care because they have no distress or remorse over the possibility.”

Let’s face it – that’s a very sobering teaching! But let’s put it into context. Note that Jesus didn’t address his comments to his disciples or a mere crowd. He was talking specifically to Pharisees who had personally witnessed his miracle of completely and instantly healing a blind and mute demon-possessed man (Matthew 12:22). Rather than acknowledging the obvious fact that Jesus was exercising divine powers, the Pharisees were so spiritually depraved that they attributed his power to Satan (v. 24).

“Their problem was not blind ignorance, but willful rejection,” pointed out Cornish. “That deliberate refusal to believe, even though knowing the truth, seems to be what Jesus called the unforgivable sin.”

As the Quest Study Bible puts it, “Jesus gave the solemn warning in these verses to people whose hard-heartedness placed them on the brink of disaster. Blasphemy against the Spirit evidently is not just a one-time offense; rather, it is an ongoing attitude of rebellion – a stubborn way of life that continually resists, rejects and insults the Holy Spirit. This is what makes it, in effect, an eternal sin (Mark 3:29). Blasphemy against the Spirit is not unforgivable because of something done unintentionally in the past, but because of something being done deliberately and unrelentingly in the present.”

So if you’re an authentic Christian, don’t spend time fretting over whether you have accidentally committed this unforgivable offense. “There is no biblical evidence that a genuine Christian can commit this (unforgivable) sin,” says the Apologetics Study Bible. “Fear that one has done so is probably a good sign that one hasn’t, for full-fledged apostasy is a defiant rejection of everything Christian and lacks the tender conscience that would be worried about such an action.” — Lee Strobel