The best value in digital Bible study. No software to install. $3.99 a month for 50+ reference books. Try it FREE.
Log In/Sign Up
Bible Book List
Font Size
2016 in Review
Based on over 1.7 billion pageviews and over 180 million unique visitors to Bible Gateway from December 2015 through November 2016, this data provides a glimpse at how people engaged with the Bible in 2016.

What people search for in the Bible varies throughout the year. This interactive lets you explore how cyclical some queries are, often repeating every year around the same time each year. Enter a query into the search box (valid queries are suggested to you as you type) and press “Visualize” to track how popular the query was on a given day in 2014, 2015, and 2016—the farther from the center, the more popular it was. This visualization is inspired by The Rhythm of Food.

Here are the most-popular keyword searches in 2016 in both English and Spanish. Hover your cursor over a keyword to see how popular it is in both languages.

Bible Gateway introduced emoji search this year. Here are the most-popular emoji you searched for.

The following visualization shows how certain Bible chapters were more popular than others in 2016. Darker chapters are more popular, and if you enlarge the image, you can see which verses in each chapter are most popular. 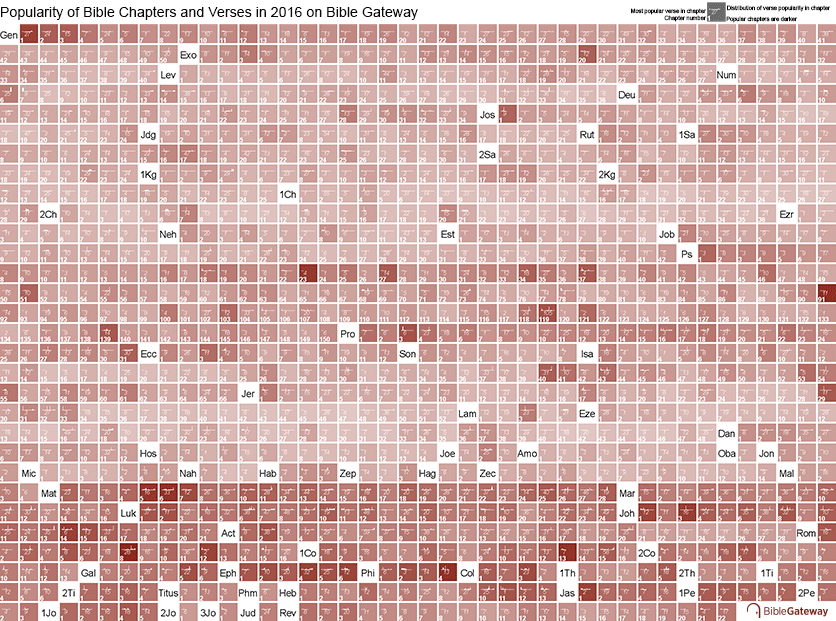 Do you follow a reading plan to help you read through the Bible in a year? The following chart shows verses that are unusually popular on a given day. Dates are along the bottom, while verses are on the side: reading Genesis 1 on January 1 appears in the bottom left of the chart, while reading Revelation 22 on December 31 appears in the top right. Each dot indicates that the verse was unusually popular on the given day. This chart traces the paths we take through Scripture during the year and also shows some of the times of year when Bible reading is most intensive, especially around Easter and Christmas. 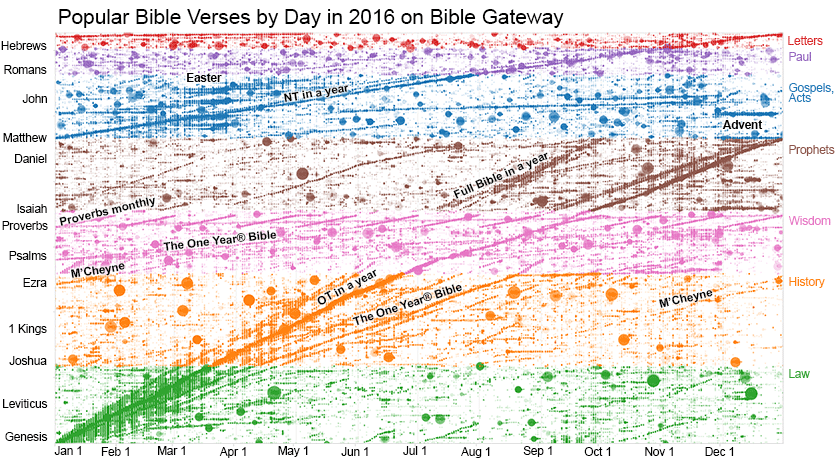 Here are the overall most-popular Bible verses in 2016 on Bible Gateway:

Visitors to Bible Gateway can highlight and take notes on Bible passages. Here are the top verses annotated this year, by type of annotation: