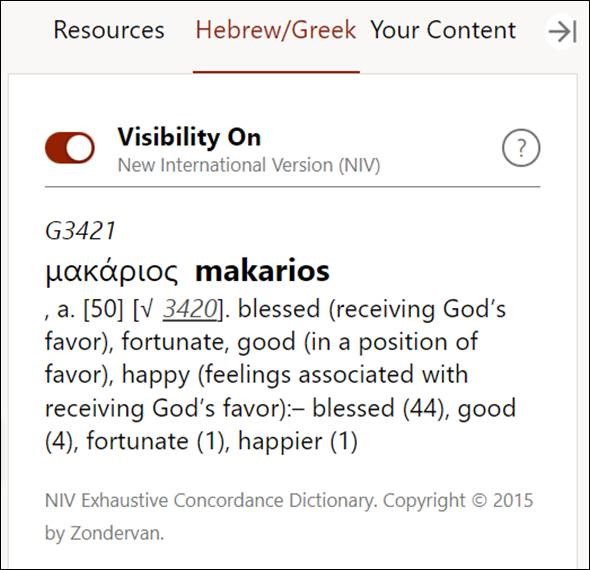 On a hillside, possibly in the Korazim Plateau in northern Israel near the Sea of Galilee, Jesus began his Sermon on the Mount—the term first used by the 4th/5th century theologian, Augustine—with a grouping of virtues we know as the Beatitudes, in which he repeatedly emphasized the Greek word makarios, meaning “blessed (receiving God’s favor), fortunate, good (in a position of favor), happy (feelings associated with receiving God’s favor),” according to the NIV Exhaustive Concordance Dictionary for the reverse interlinear function in Bible Gateway Plus.

The NIV Application Commentary for Matthew on Bible Gateway Plus says, “Makarios is a state of existence in relationship to God in which a person is ‘blessed’ from God’s perspective even when he or she doesn’t feel happy or isn’t presently experiencing good fortune. Negative feelings, absence of feelings, or adverse conditions cannot take away the blessedness of those who exist in relationship with God.”

In his study Bible notes, Dr. Tony Evans calls the Sermon on the Mount Jesus’ kingdom manifesto. He says, “We could call the Beatitudes antibiotics from God’s pharmacy that can aid life transformation. They are a reminder that Jesus is primarily concerned with what’s happening on your inside, which should be the basis of what you’re showing on the outside.”

Max Lucado, in his study Bible notes, says, “Sacred delight is what Jesus promises in the Sermon on the Mount.”

It only takes a minute to create your own Bible Gateway free personal account and you’ll immediately upgrade your Bible Gateway experience. Do it right now!

What Are the Beatitudes

The NIV Study Bible Notes, Fully Revised Edition describes the beatitudes as “blessings Jesus pronounced on the most unlikely of people—the poor, the hungry, the meek—as the kingdom of God was arriving in his ministry.”

The opposite of curses, blessings are the bestowment of favor, mercy, and protection upon a person, resulting in that person’s happiness and feelings of joy, satisfaction, contentment, and fulfillment.

Who Gave the Beatitudes

The Beatitudes were the pronouncements Jesus used to start his Sermon on the Mount. Jesus was born and lived in the early three decades of the first century during the reign of Roman emperor Tiberius Caesar Augustus and two rulers in Israel with the dynastic title Herod: the Idumean Herod the Great, and Herod Antipas, according to the New International Encyclopedia of Bible Characters.

How Did the Name “Beatitudes” Originate

The Beatitudes were named from the word translated “blessed” in its Latin root, beatus. “Aristotle used this Greek word to mean ‘divine’ blessedness in contrast to human happiness. It included the idea of not being subject to fate,” according to the Encyclopedia of the Bible on Bible Gateway. “Jesus apparently pointed with this word to the intention of God for human life, and thus a person in the condition of being truly well-off. This divine intention for life was a portrait of Jesus himself in a sense. Jesus was the very embodiment of the Sermon on the Mount.”

Where Are the Beatitudes in the Bible

When people talk of the Beatitudes, they usually think first of the Scripture passage Matthew 5:3–12. But four Beatitudes can be found also in Luke 6:20–22, set within the Sermon on the Plain (Luke 6:17–49).

What Do the Beatitudes Describe

Named from the initial words (beati sunt, “blessed are”) of those sayings in the Latin Vulgate Bible, the Beatitudes describe the blessedness of those who have certain qualities or experiences that identify people belonging to the kingdom of heaven. “In the Beatitudes Jesus announces that God’s values are often radically different from the world’s,” according to the Zondervan Illustrated Bible Backgrounds Commentary of the New Testament on Bible Gateway Plus. “God will bless those who pursue the ethics of his kingdom and choose to put him first over the things of this world.”

Here is a list of the Beatitudes found in the Gospel of Matthew:

How Many Beatitudes Are There

Bible scholars differ as to the exact number of Beatitudes. They have been counted as seven, eight, nine, or even ten. Each Beatitude begins with the word “Blessed.” In Matthew 5’s grouping of verses, the word “blessed” occurs nine times, but some scholars say the last two (verses 10–11) can be considered as being connected.

In What Context Were the Beatitudes Given

“The Sermon was not delivered to a general audience nor to novices, but to selected disciples who had been for some time in association with Jesus. The reason given for Jesus’ going up the mountain was to escape the crowds (Matt 5:1). The Sermon was thus addressed to the disciples and not the crowds, though the latter may have been sitting on the fringe of the disciple group,” according to the Encyclopedia of the Bible on Bible Gateway. “Matthew omits all indications of date, and it is incorrect to assume that it was at the beginning of Jesus’ ministry because the crowds came later. Jesus here is a teacher, not an evangelist.”

What do the Beatitudes Mean

The Reformation Study Bible says, “We must recognize that the sermon is directed to the disciples and through them to the whole church today. The sermon addresses both inward motives and outward conduct (5:21, 22, 27, 28). These legitimate demands are so strict (5:48) that no one can completely obey them, and we are therefore driven to the grace and mercy of God. In some cases Jesus uses obviously intentional exaggeration to illustrate the absolute requirements of God’s law (5:29-30).”

“Character is the identity of who we are, but conduct is what we do,” says Vines Expository Bible Notes. “Character comes first and conduct flows from it. Behavior follows belief. The Beatitudes display the beauty of kingdom life.”

Study the Beatitudes with the help of more than 50 premium Bible reference resources when you become a member of Bible Gateway Plus. Get biblically wise and spiritually fit. Try it free right now!