Blog / Letters to the Church: The Epistle to the Ephesians

Letters to the Church: The Epistle to the Ephesians

Did you know that most of the books that comprise the New Testament are actually letters? These letters (also known as “epistles”) contain both general Christian teaching and specific instructions for the congregation to which they were addressed. As part of our Letters to the Church series, we’re taking a brief look at each epistle in the New Testament. Our last entry examined Paul’s first letter to the church in Corinth, but this week we’re skipping ahead a bit (don’t worry, we’ll return to the Corinthians soon) to look at Paul’s words of encouragement and caution to the Ephesians.

[See commentaries on Ephesians in the Bible Gateway Store]

[See other Blog posts in the Letters to the Church series]

Paul’s Letter to the Ephesians

When was it written? Around 60 A.D. Some sources say that it was written around the same time as Paul’s letter to the Colossians, since it’s similar in style and purpose.

Where was it written? Possibly from the prison cell where Paul was being held in Rome.

To whom was it written? Ephesians is primarily written to Gentile (non-Jewish) followers of Christ—most likely the church in Ephesus. (Unlike some of Paul’s other letters, it doesn’t begin with individual greetings. For this reason, there is debate about whether it was specifically intended for the church in Ephesus, or if it was meant to be circulated more widely.) 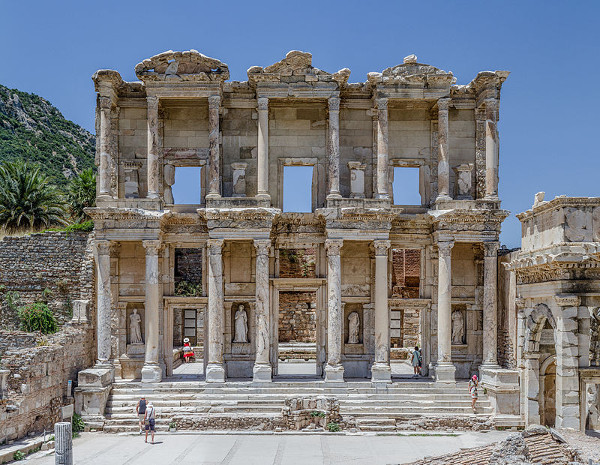 Why was it written? Paul wrote this letter to encourage Gentile believers, and to make it clear that Jews and Gentiles have been brought together as part of one body in Christ. Paul is also concerned that his audience be made aware of the moral laws they may have been lax in following (or that they were unaware of).

What does it say? Ephesians is first and foremost an encouraging letter. Because of Christianity’s strong roots in Jewish history and religion, it was natural for early Christians to wonder if Christ’s gospel was limited to Jews, or if Jewish Christians held a special status because of their ethnic heritage. Paul clearly wants his Gentile brothers and sisters to know that in God’s kingdom, they are first-class citizens alongside their Jewish brethren. To get this point across, he uses a number of phrases and metaphors that imply unity: the “body of Christ” as a description of God’s kingdom on earth, and marriage as a mirror of Jesus’ relationship with the church.

Paul also reminds his audience that since they now belong to Christ, they must start living their lives differently. They need to distance themselves from immorality and strive for spiritual purity. It’s in the context of this discussion that he uses the famous metaphor of the “armor of God.”

What can we learn from Ephesians? This letter would have been tremendously encouraging to the non-Jewish believers who received it—and its message that Christianity is not bound by ethnicity is important for readers today, no matter our nationality or ethnic heritage. Paul’s letter to the Ephesians is filled with reminders that God’s kingdom is open to all those who put their faith and trust in Him.

Consider these questions as you read Ephesians today:

I highly recommend reading Ephesians in one sitting. It’s short (only 6 chapters) and won’t take you too long. Given its brevity, you might also try listening to it in one of our audio Bibles. It’s a book full of encouraging words and practical advice that will serve you well.

Filed under Letters to the Church