Blog / What About Bible Translations?

What About Bible Translations?

If you are wondering what English translation of the Bible to use, know this: you are blessed with an array of excellent choices. In the past few hundred years, interest in and reverence for the Bible has inspired major efforts involving thousands of researchers, linguists, and translators. The complete Bible is available in about 500 languages today, with thousands more having portions of the Bible in translation.

The purpose of Bible translation is to accurately render the meaning of biblical texts from their original languages—Hebrew and Aramaic for the Old Testament, and Greek for the New Testament—into a “receptor language.” Scholars and committees of scholars use the latest knowledge of ancient manuscripts to express accurately what the original authors of Scripture meant. 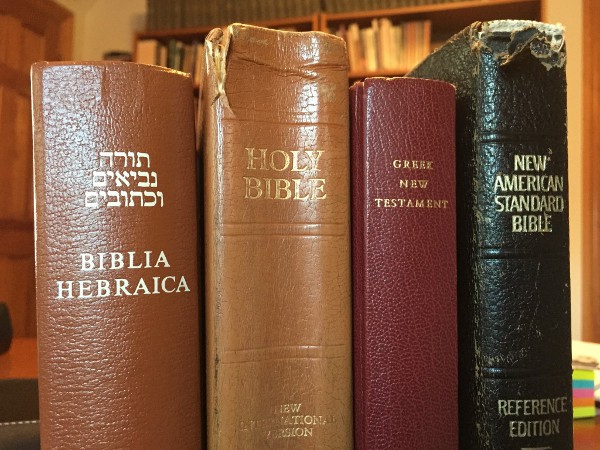 Why are there dozens of different English translations? It is because there are options as to how Bible translators carry the meaning of Greek and Hebrew texts into the receptor language. For example, some translations aim at rendering the meaning of texts word-for-word (sometimes referred to as “literal” translations). The upside to this approach is that the Bible reader can know the specific word choice and phraseology of the biblical authors. The downside is that Bible texts translated in this way can be more difficult to read. Until one gets used to the style, it can seem stiff, wooden, and unfamiliar—but one can certainly get used to it.

Another approach is to translate thought for thought. Translation done in this way will have language that is more familiar to English readers, and thus probably easier to read. Translating in this way can still be regarded as accurate, if the true meaning of the original text is carried across.

Then there is the method of free translation or paraphrase, the purpose of which is to give readers the flow of the biblical text idea by idea, oftentimes rendering the meaning of whole sentences in new ways, rather than carrying over the exact words of the Hebrew or Greek. A paraphrase may use the word flashlight instead of lamp, for instance.

Heated debates surround the issue of Bible translation. People who take the Bible seriously want translations that are accurate and faithful to what the writers of Holy Scripture intended to communicate. But the typical Bible reader can be assured that there is not just one accurate translation. In fact, for the serious believer, the best thing is to have and read different translations for devotional reading, but especially in studying the Bible or preparing to teach it.

I can speak personally about this. As I was growing up, I tried many times to read the standard mainstream Bible I’d been given in church and failed. But when someone put a brand-new paraphrase of the New Testament in my hand when I was 17 years old, I started reading it and could not put it down. My life was changed that early summer. A year later, I started reading one of the most literal translations available. It was hard work, and it took me the better part of a year, but it was beneficial to me at a different level. In the decades that followed, I got used to referring to numerous translations as I prepared teachings and sermons. I have so much respect for the diligent experts who have given us these gifts.

Below is a list of some of the most popular versions of the Bible in English sold today.

(Author NOTE- I am not recommending this entire list of versions, simply describing what is being widely used today. When I have been asked, as a pastor, what version I would recommend, I tell people to use the one they will actually read. What do I read? While I am able to read the Bible in Hebrew or Greek, most of the time, like most people, I rely on good translations. Typically that means opening the English Standard Version or The New International Version, with an occasional peek into the New Living Translation.)

Use the links to get more information.

King James Version—the classic 1611 translation that is a landmark in English literature, but far removed from contemporary English

Next time: “What Help Can We Get So We Understand the Bible Better?”

Care to offer feedback this week?

Filed under How to Understand the Bible, Translations