Blog / What Happened After the Resurrection?

What Happened After the Resurrection? 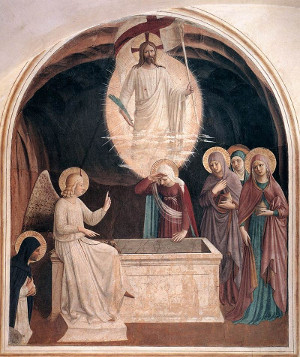 Christians around the world have spent a lot of time over the last few weeks pondering the Gospel accounts of Jesus’ death and resurrection (and here at the Bible Gateway blog, we spent plenty of time discussing them too). During Easter week, we read the familiar stories of the Triumphal Entry, the Last Supper, the crucifixion… and then with the Resurrection on Easter Sunday, the story ends. Right?

Not quite. While the Gospels of Matthew and Mark end shortly after the Resurrection, Luke and John provide extra detail about what Jesus did during the time between his resurrection and his ascent into heaven. If your Gospel reading stopped at the Resurrection, you’re missing out on several interesting stories.

Jesus’ Appearances After the Resurrection

Luke and John both describe at length Jesus’ post-Resurrection appearances to his followers. (Mark mentions these briefly as well.) Jesus’ appearance before “doubting Thomas” and the other disciples (in John and in Luke) are well known and contain a number of little details. For instance, Jesus appeared “when the disciples were together, with the doors locked for fear of the Jewish leaders”—a minor sentence, but one that communicates the terror and bewilderment that must have plagued the disciples in the immediate aftermath of Jesus’ crucifixion. If you had been one of Jesus’ disciples, what might you have done in this situation—reeling from the death of your teacher, fearing for your life, and wondering if everything you believed in was really true?

The Gospel of Luke also describes an encounter with Jesus on the road to Emmaus. With tantalizing but confused rumors of the empty tomb still spreading, Jesus appears in disguise to a pair of his followers. After visiting with and teaching them for some time, Jesus reveals himself in a beautifully-described scene:

When he was at the table with them, he took bread, gave thanks, broke it and began to give it to them. Then their eyes were opened and they recognized him, and he disappeared from their sight. They asked each other, “Were not our hearts burning within us while he talked with us on the road and opened the Scriptures to us?”

The Gospel of John provides a few more memorable stories. First, Jesus (again, unrecognized at first) performs his last recorded miracle, overwhelming the disciples’ fishing nets with a huge catch. Shortly thereafter is the moving story of Peter’s reinstatement. Peter, who had denied knowing Jesus three times during his master’s trial, is questioned by Jesus… three times. It is during this questioning that Jesus gives Peter the famous charge to “Feed my sheep.”

Matthew and Mark both close with the “Great Commission,” Jesus’ instructions to his disciples to go out into the world and spread the good news of salvation:

Then Jesus came to them and said, “All authority in heaven and on earth has been given to me. Therefore go and make disciples of all nations, baptizing them in the name of the Father and of the Son and of the Holy Spirit, and teaching them to obey everything I have commanded you. And surely I am with you always, to the very end of the age.” (Matthew 28:18-20 NIV)

This passage has long been the basis of the Christian emphasis on sharing the Gospel with the world through evangelism and missionary work.

Mark and Luke describe Jesus’ departure from earth into heaven, “taken up into heaven” after speaking to his disciples a final time.

It’s clear from the Gospel accounts that the story of Jesus reaches its culmination with the Resurrection. But the tidbits we do get about the post-Resurrection days not only satisfy some of our curiousity about how Jesus’ Resurrection was received by his followers, but also give us the evangelistic direction that guides Christ-followers to this day.