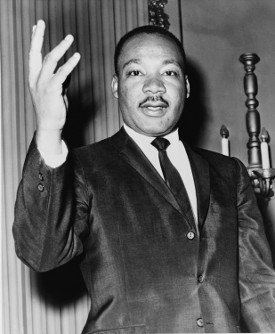 Today is Martin Luther King, Jr. Day, a U.S. holiday dedicated to the memory of the massively influential civil rights activist. King is remembered primarily as a civil-rights figure who fought for social and political change, but he was also a pastor—and he considered his ideas about civil rights to be firmly rooted not just in common sense or political theory, but in Scripture itself.

I thought it would be interesting and appropriate today to look at some of King’s best-known sermons and identify the Bible passages upon which they are based.

One of King’s most creative sermons is a clever mirror of the apostle Paul’s letters to the early church in New Testament books like Galatians, Ephesians and Philippians. The sermon, “Paul’s Letter to American Christians,” imagines a fictional epistle written to 20th-century Americans. It begins in a familiar style:

I, an apostle of Jesus Christ by the will of God, to you who are in America, Grace be unto you, and peace from God our Father, through our Lord and Savior, Jesus Christ….

As in the New Testament epistles, King’s imagined letter from Paul contains both praise and criticism for its audience of believers. King imagines that Paul would critique not just America’s racial inequality, but the un-Christian greed and materialism that define so much of American life.

“Loving Your Enemies” is a 1957 King sermon based on one of the most famous passages from the Sermon on the Mount, Matthew 5:43-48:

“You have heard that it was said, ‘Love your neighbor and hate your enemy.’ But I tell you, love your enemies and pray for those who persecute you, that you may be children of your Father in heaven. He causes his sun to rise on the evil and the good, and sends rain on the righteous and the unrighteous. If you love those who love you, what reward will you get? Are not even the tax collectors doing that? And if you greet only your own people, what are you doing more than others? Do not even pagans do that? Be perfect, therefore, as your heavenly Father is perfect.

After discussing different Greek words for “love” used in the Bible, King reflects on Jesus’ command:

…it’s significant that he does not say, “Like your enemy.” Like is a sentimental something, an affectionate something. There are a lot of people that I find it difficult to like. I don’t like what they do to me. I don’t like what they say about me and other people. I don’t like their attitudes. I don’t like some of the things they’re doing. I don’t like them. But Jesus says love them. And love is greater than like. Love is understanding, redemptive goodwill for all men, so that you love everybody, because God loves them. You refuse to do anything that will defeat an individual, because you have agape in your soul. And here you come to the point that you love the individual who does the evil deed, while hating the deed that the person does. This is what Jesus means when he says, “Love your enemy.” This is the way to do it. When the opportunity presents itself when you can defeat your enemy, you must not do it.

It’s not hard to see the point King is making here, given the criticism and opposition the civil rights movement faced at the time.

King’s 1967 sermon “Why Jesus Called a Man a Fool” is an examination of a passage from Luke 12. Here’s how King paraphrases the story before beginning his analysis:

I want to share with you a dramatic little story from the gospel as recorded by Saint Luke. It is a story of a man who by all standards of measurement would be considered a highly successful man. And yet Jesus called him a fool. If you will read that parable, you will discover that the central character in the drama is a certain rich man. This man was so rich that his farm yielded tremendous crops. In fact, the crops were so great that he didn’t know what to do. It occurred to him that he had only one alternative and that was to build some new and bigger barns so he could store all of his crops. And then as he thought about this, he said, “Then I’m going to do something after I build my new and bigger barns.” He said, “I’m going to store my goods and my fruit there, and then I’m going to say to my soul, ‘Soul, thou hast much goods, laid up for many years. Take thine ease, eat, drink, and be merry.’” That brother thought that was the end of life.

But the parable doesn’t end with that man making his statement. It ends by saying that God said to him, “Thou fool. Not next year, not next week, not tomorrow, but this night, thy soul is required of thee.”

If you think of King only as a civil rights activist, you might be surprised at how much of his message of equality drew on Scripture, and at King’s concern for American moral challenges beyond racial discrimination. I encourage you today to look for yourself—open your Bible (or BibleGateway.com, of course!) and set it alongside a few of King’s sermons, checking out the Scriptures as you read. (Here’s a comprehensive archive of King’s sermons and speeches; but you might find Wikipedia’s shorter list of notable King sermons to be an easier place to start.) Do King’s Scriptural analyses hold up to scrutiny? Could these sermons be preached at your own church today? How might King have preached about these same passages today if he were still alive?