Blog / Epiphany: God Revealed to the World Through Jesus Christ

Epiphany: God Revealed to the World Through Jesus Christ 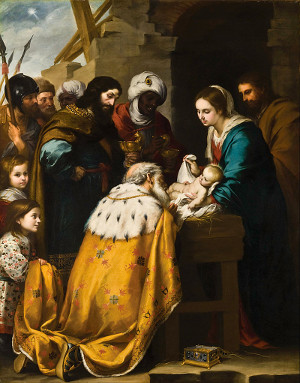 It might feel like the holiday season is behind us, but we’re not quite done with the Christmas season yet—today is Epiphany, a day set aside to commemorate God’s revelation to the world through the person of Jesus Christ.

In the Western church, the Scripture account usually highlighted on Epiphany is the famous story of the visit of the Magi (often called the “wise men”), which you can read in Matthew 2:

After Jesus was born in Bethlehem in Judea, during the time of King Herod, Magi from the east came to Jerusalem and asked, “Where is the one who has been born king of the Jews? We saw his star when it rose and have come to worship him.”

When King Herod heard this he was disturbed, and all Jerusalem with him. When he had called together all the people’s chief priests and teachers of the law, he asked them where the Messiah was to be born. “In Bethlehem in Judea,” they replied, “for this is what the prophet has written:

“‘But you, Bethlehem, in the land of Judah,
are by no means least among the rulers of Judah;
for out of you will come a ruler
who will shepherd my people Israel.’”

Then Herod called the Magi secretly and found out from them the exact time the star had appeared. He sent them to Bethlehem and said, “Go and search carefully for the child. As soon as you find him, report to me, so that I too may go and worship him.”

After they had heard the king, they went on their way, and the star they had seen when it rose went ahead of them until it stopped over the place where the child was. When they saw the star, they were overjoyed. On coming to the house, they saw the child with his mother Mary, and they bowed down and worshiped him. Then they opened their treasures and presented him with gifts of gold, frankincense and myrrh. And having been warned in a dream not to go back to Herod, they returned to their country by another route.

Although the Magi leave the spotlight at this point, the story continues in the following verses to describe King Herod’s hunt for the Christ-child, which culminated in the “Massacre of the Innocents” and the flight of Mary, Joseph, and Jesus to Egypt. If you usually stop your Christmas Bible reading right after the story of Jesus’ miraculous birth, I encourage you to take a moment to read just a few verses further in Matthew. The Bible tells us little about Jesus’ life between his birth and the start of his ministry, but what it does share is fascinating.

As mentioned above, the visit of the Magi is the story most closely associated with Ephiphany in the Western church. In Eastern Christian traditions, Epiphany focuses instead on the baptism of Jesus by John the Baptist, which you can discover by simply continuing your reading into Matthew 3. Here’s the key moment in that story:

Jesus replied, “Let it be so now; it is proper for us to do this to fulfill all righteousness.” Then John consented.

As soon as Jesus was baptized, he went up out of the water. At that moment heaven was opened, and he saw the Spirit of God descending like a dove and alighting on him. And a voice from heaven said, “This is my Son, whom I love; with him I am well pleased.”

Both approaches to Epiphany celebrate the same thing: the incarnation of Jesus Christ, and his appearance before a waiting world. Depending on your church tradition and denomination, your church may or may not be celebrating Epiphany today with a special worship service. Regardless, take a few minutes today to sit down and read these important Bible passages—and reflect on the incredible gift presented to us all in the person of Jesus Christ.