Blog / Who Was Paul, and How Should We Understand His Epistles?

Who Was Paul, and How Should We Understand His Epistles?

This is part of Mel Lawrenz’ “How to Understand the Bible” series. If you know someone or a group who would like to follow along on this journey through Scripture, they can get more info and sign up to receive these essays via email here.

Besides Jesus, no single figure was more influential in the beginnings of Christianity than the apostle Paul. Of the 27 books of the New Testament, 13 are attributed to Paul. Take a look at a Bible map showing the missionary journeys of Paul, and you will be astonished to see the territory he covered—not just geographically, but culturally as well.

He was a Jew from the tribe of Benjamin, and he became an impassioned member of the Pharisees (Rom. 11:1; Phil. 3:4-5; Acts 23:6). He came from the city of Tarsus, grew up in the midst of Greco-Roman culture, and was a Roman citizen. This remarkable background meant he was able to speak the gospel into urban settings. He was comfortable in Jerusalem, but also capable of moving into places like Crete, Greece, and Rome. His adaptability was amazing. He spoke with magistrates and philosophers and tradespeople. 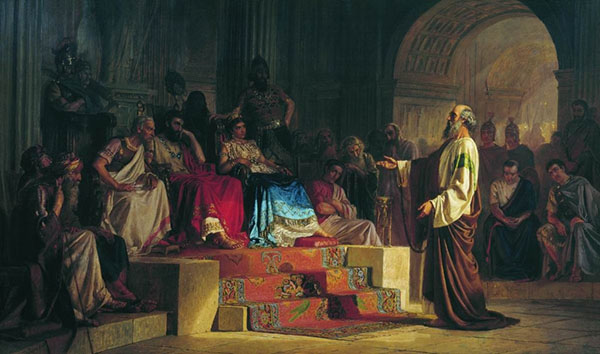 His strong views about faith in Christ were most certainly tempered by his dramatic conversion. In the New Testament there is no more radical story of personal change than the story of the young man who was drafted by his fellow Pharisees to actively investigate and prosecute the early followers of Jesus. He stood by as the first Christian martyr, Stephen, was stoned to death. But while traveling to Damascus in Syria to find and arrest more of Jesus’ followers, he had a supernatural encounter with Jesus and would soon undergo the utter change of mind and heart, which in his epistles he describes as conversion or repentance.

It wasn’t easy for the other apostles to accept this persecutor in their midst, much less endorse him as a teacher. But with the passing of years, Paul eventually set out on his first great journey with a few close companions in tow.

There is quite some variation in the epistles of Paul. Four are called his “prison epistles” because he wrote them from prison (Ephesians, Philippians, Colossians, Philemon). The stress of being in prison comes through at points. For instance, while writing the epistle to his dear friends at Philippi, he believes he may be close to execution.

Of these four, one is written to one person about a runaway slave (Philemon), whereas another, Ephesians, seems to have been written for a whole region of churches.

Three of the epistles, written very late, are usually called “the pastoral epistles” because they contain instructions to Paul’s companions Timothy and Titus on how to protect order, harmony, and correct teaching in their churches. Not surprisingly, these are epistles that church leaders look to in shaping ministry roles in congregations. The qualifications for elders and deacons (1 Tim. 3; Titus 1), for instance, describe essential leadership character and are easily applied in our own churches today.

Want to learn more from Mel Lawrenz? Sign up to receive his weekly email series: How to Live the Bible.

Romans is a powerful, comprehensive description of the whole of the gospel. It covers creation, sin, redemption, and eventual restoration. The special issue of righteousness and grace is emphasized in Romans, as it also is in the epistle of Galatians. First and 2 Corinthians offer great insight into an apostle trying his best to respond to tensions in a troubled church, to challenge bad values, and to call people to action. There is a special poignancy in 2 Corinthians as Paul describes his own hurt through the efforts of those trying to discredit him, and his anxiety about his relationship with the Corinthian church. Here we see the humility of Paul, even as he describes himself as unimpressive in physical appearance and unremarkable as a public speaker. Now that is astonishing to read! The apostle Paul, a so-so preacher.

What should we bear in mind as we read and try to comprehend the epistles of Paul?

In order to understand the epistles of the New Testament, we must begin with context. Every epistle was written to a specific audience and for a specific purpose. If we dig around, we can figure out what false teaching the book of Colossians is countering, what slavery looked like, what family life was like, what the features of the culture were at the time. Then we can ask: “What universal and timeless truths is the author drawing on, truths that apply to us today?”

We may not “greet one another with a holy kiss” (Rom. 16:16) today, but Christian grace and civility still apply. First Peter 3:3 recommends not wearing gold jewelry because in that culture it was ostentatious to do so. Today, avoiding ostentatiousness still applies, though having a gold ring or a gold cross does not rise to that same level. Having elders oversee the ministry of churches today still applies, although having one man appoint them (as Paul instructed Timothy to do) isn’t typically the method of selection that is used.

The epistles extend the richness of Holy Scripture, and they remind us once again that the word of God is truth in relationship.