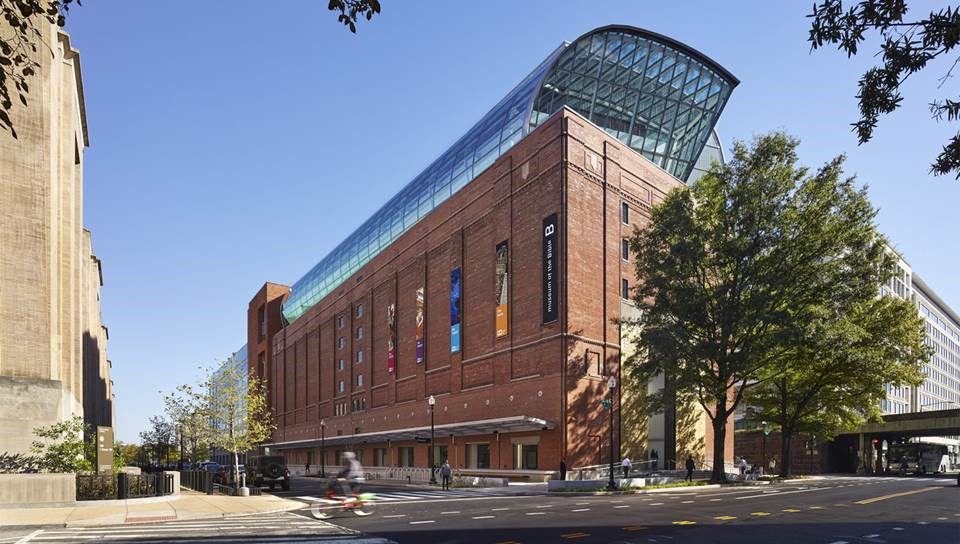 Nov. 17, one day before Museum of the Bible (@museumofBible) opened to the public, a diverse group of faith and secular leaders from around the world gathered at the eight-story, 430,000-square-foot museum in Washington, DC, to dedicate the newest museum in the nation’s capital in front of a standing-room-only crowd.

Bible Gateway is a Founding Advocate member of the museum, and is included in the museum’s One Million Names wall commemoration.

According to a museum fact sheet, visitors would have to spend nine eight-hour days in the museum to read every placard, see every artifact, and experience every activity offered. The second, third, and fourth floors are categorized galleries for the Impact of the Bible, Narrative of the Bible, and History of the Bible, respectively.

[Read the Bible Gateway Blog post, How Has the Bible Shaped Our World?: An Interview with Steve Green]

Visitors enter the museum on the first floor through the nearly 40-feet high Gutenberg Gates, comprised of 118 brass panels inscribed in Latin with the first 80 lines of Genesis. The script is written in reverse to encourage guests to create souvenir rubbings, according to the museum’s website. Also on the first floor, children can “walk on water” in the nearly 2,200-square-foot Courageous Pages children’s exhibit. Walking on Water, one of 13 Courageous Pages areas of interest, technologically creates the illusion of a watery surface where children may stand and inspect animated marine life below, according to museum publicity.

The second floor’s 27,000 square feet of exhibit space demonstrates the Bible’s influence “on nearly every aspect of life,” according to museum promotions. A 254-foot-long tapestry telling the Bible’s place throughout American history is a focus of the second floor, which also showcases the Bible in worldwide culture, government, and contemporary news.

Publisher Steve Strang recounts his interview with co-founder Green about the museum’s creation: “He also told me about the miracles that went into the making of the museum. In a city, where it is difficult to find large properties for sale, his team found one a short walk from the Capitol and also from the Smithsonian museums along the National Mall. Built in 1923, the building was the first refrigerated warehouse in Washington, built so sturdily that locomotives could go inside to unload.

“‘We were able to acquire air rights above the office building that was attached to the original building where we added one new floor,’ Green said. ‘We were able to add two new floors on top of the historical building while retaining the 95-year-old exterior. Clark Construction Company said it was one of the most complex projects they had done, with all those dynamics.'”

Those joining in Friday’s pre-opening celebration in the museum’s 472-seat, technologically advanced World Stage Theater included Cardinal Donald Wuerl, archbishop of Washington; Rear Admiral Margaret Kibben, chief of chaplains of the US Navy; Rabbi Stuart Weinblatt, president of the Rabbinic Cabinet of the Jewish Federations of North America; US Senate Chaplain Barry Black; and Ron Dermer, Israel’s ambassador to the US. Museum of the Bible president Cary Summers, executive director Tony Zeiss, EdD, and chairman of the board and museum co-founder Steve Green welcomed guests and spoke about the vision of the museum.

“We want to take a moment to set our differences aside and say, here’s a book that has changed our world…impacted lives; and we want to celebrate it in this facility today. And when guests leave hopefully they will be inspired to get engaged with it,” Green said.

“We created this museum to help our guests understand and appreciate the role of the Bible—not only in America, but globally,” Summers said.

“Our purpose is this: to invite all people to engage in this wonderful book we call the Bible,” Zeiss said. “Its history, its narrative and its impact. In fact, those are the three themes you will see throughout this museum.”

Washington, DC, mayor Muriel Bowser said, “It is appropriate that in the nation’s capital where we have soaring museums and monuments and where people visit us from around the world that the Museum of the Bible would be built here.”

Cardinal Wuerl read a letter from Pope Francis: “His Holiness Pope Francis sends cordial greetings and prayerful best wishes to all gathered…for the inauguration of Museum of the Bible. It is his fervent hope that this significant cultural institution, through its extensive collections and exhibits, will promote a better understanding not only of the rich and complex history of the biblical text, but also the enduring power of its message to inspire and shape the lives of individuals and peoples of every time and place.”

[Read Bible Gateway Blog posts that introduce you to the Bible]

The Israeli Minister of Tourism, Yariv Levin, shared a message from Prime Minister Benjamin Netanyahu. “This impressive building and the fascinating educational exhibits it contains is a fitting home for the thousands of religious texts and artifacts in your remarkable collection. By featuring Jewish, Protestant, Catholic and other faith traditions, the museum highlights our shared values and beliefs.” 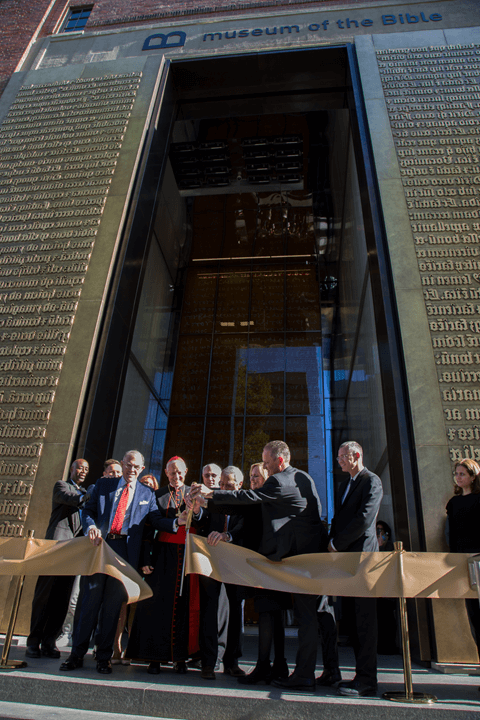 Israeli Ambassador to the United States Ron Dermer said, “Today, nearly two and a half centuries after America’s founding, we are gathered to celebrate the arrival of the Bible in your capital….Just as the Bible has always been the most prized possession of the Jewish people, the Bible has always been cherished by the American people. The towering figures that are memorialized with monuments in this great city surely testify to that.”

The Friday morning ceremony was followed by an official ribbon-cutting in front of the museum’s entrance.

Discover fresh inspiration in your favorite Bible stories with Bible Gateway Plus. Try it right now!