Blog / Did You Know the Saying “God Helps Those Who Help Themselves” Isn’t in the Bible?

Did You Know the Saying “God Helps Those Who Help Themselves” Isn’t in the Bible?

Jeremy Bouma
Jeremy Bouma (Th.M.) has pastored on Capitol Hill and with the Evangelical Covenant Church in Michigan. He founded THEOKLESIA, which connects the 21st century Church to the vintage Christian faith; holds a Master of Theology in historical theology; and makes the vintage faith relevant at jeremybouma.com.
While discussing God’s relationship to people and their circumstances, a friend quoted a phrase many people assume is in the Bible:

“God helps those who help themselves.”

He isn’t alone: one in 8 Americans believe the Bible not only teaches this, but that it says this, too.

And yet if you went searching for it in the book of Proverbs or in the sayings of Jesus, you’d be out of luck—it’s nowhere in the Bible. In fact, the Bible says and teaches the exact opposite!

So if it’s not in the Bible, where’d it come from? And what does the Bible say instead?

[Read the Bible Gateway Blog post, Did You Know Jesus’ Ancestors Are Not Who You Think They Are?]

Benjamin Franklin Offers God’s Help to Those Who Help Themselves 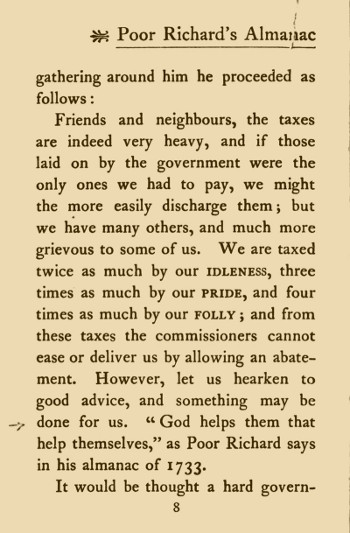 Although he didn’t invent it, Benjamin Franklin is generally held to have popularized this motto in his Poor Richard’s Almanac. Here’s how it appears in the 1757 edition:

…let us hearken to good advice, and something may be done for us. “God helps them that help themselves,” as Poor Richard says, in his almanac of 1733.

While this may sound superficially like the kind of proverb you might hear from a committed Christian, Franklin was a deist. He didn’t believe in a personal God who is actively involved in the affairs of people, but rather in a God who set the world in motion but stands at a distance while we fend for ourselves.

So not only is this motto not in the Bible, it wasn’t popularized by someone who was committed to the historic Christian faith and the Bible’s teachings on God’s character.

[Read the Bible Gateway Blog post, Did You Know That the Founder of Christianity Was Jewish?]

Aesop Promises Help from the Gods When We Help Ourselves 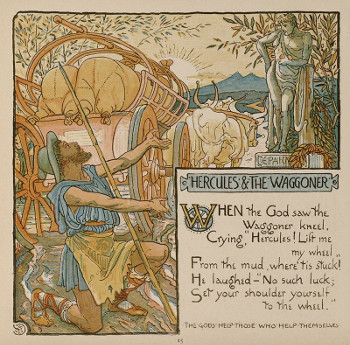 The real origin of the motto probably lies in ancient Greece, when the storyteller Aesop wove the proverb into one of his tales:

A WAGGONER was once driving a heavy load along a very muddy way. At last he came to a part of the road where the wheels sank half-way into the mire, and the more the horses pulled, the deeper sank the wheels. So the Waggoner threw down his whip, and knelt down and prayed to Hercules the Strong. “O Hercules, help me in this my hour of distress,” quoth he. But Hercules appeared to him, and said:

“Tut, man, don’t sprawl there. Get up and put your shoulder to the wheel.

“The gods help them that help themselves.”

Though this catchy slogan sounds like something from the Bible’s book of Proverbs, its origin is likely in Aesop’s fables (or in ancient proverbs that inspired them).

The Quran Promises Allah’s Help After We Change Ourselves

While this motto isn’t in the Bible, a variation of it can be found in another religious text: the Quran. The Quran’s Ar-Ra’d 13:11 reads:

Indeed Allah will not change the conditions of a population until they change what is in themselves.

In this passage, the Quran expects a person to help himself by changing his own attitude and behavior before God will come to his aid. The principle is the same as that in Aesop’s proverb: those who expect divine help must first get the ball rolling themselves.

What Does the Bible Say Instead?

Whatever its origin, this popular motto doesn’t reflect what the Bible teaches. In fact, it’s the exact opposite of biblical teaching!

For example, the Old Testament book of Proverbs teaches that relying on ourselves, rather than on the wisdom of God, is foolhardy:

Those who trust in themselves are fools,
but those who walk in wisdom are kept safe. (Proverbs 28:26)

If we can’t trust ourselves, then what hope do we have? Fortunately, the Bible has an answer. The prophet Isaiah declares that God helps those who are utterly helpless:

You have been a refuge for the poor,
a refuge for the needy in their distress,
a shelter from the storm
and a shade from the heat.
For the breath of the ruthless
is like a storm driving against a wall (Isaiah 25:4)

God provides tangibly for those who are helpless and needy. God helps those who can’t help themselves. And who does the Bible consider helpless? Everyone! “All have sinned and fall short of the glory of God,” the Bible tells us:

When it comes to our greatest need—rescue from sin and death—there’s nothing we can do to save ourselves. All have turned from God; all have sinned. We are utterly unable to find true spiritual peace through our own efforts. Thankfully, that is where God comes in:

Christ’s death is the solution to the problem of sin and death that we can’t solve on our own. It’s tempting to think that we might be able to help ourselves out of even this predicament, but the Bible clearly teaches that there’s nothing we can do on our own to find salvation.

For it is by grace you have been saved, through faith—and this is not from yourselves, it is the gift of God—not by works, so that no one can boast. (Ephesians 2:8–9)

Our help comes from God alone, and it happens when we turn our lives over to him in faith, trusting in the work of Christ on the cross. This isn’t something we work for; and there’s certainly nothing we can change about ourselves to make us worthy of God’s help. Instead, we are saved by the passionate, undeserved love of God. It’s his gift to us!

That means you, me… and the world.

Discover tips for living out God's Word through the weekly newsletter, 'How to Live the Bible.'

This is the kind of fascinating Bible insight you’ll gain when you upgrade to Bible Gateway Plus!
You’ll be equipped and empowered to answer your questions about the Bible.
Try it free for 30 days!

Filed under Did You Know?