Blog / Evidence for the Resurrection: 5 Reasons the Early Church Couldn’t Have Made it Up

Evidence for the Resurrection: 5 Reasons the Early Church Couldn’t Have Made it Up 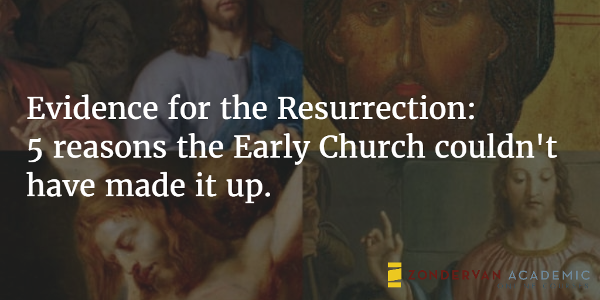 What is the evidence for Jesus’ actual bodily resurrection?

What facts related to the resurrection can be shown to be true beyond reasonable doubt—even when placed under the microscope of historical and critical scrutiny?

1. Jesus was crucified by the Romans around AD 30

No credible scholar denies that Jesus existed and that he was crucified under orders from Pontius Pilate. There’s a wealth of New Testament and extra-biblical evidence that attests to this. The two most telling examples are from Tacitus and Josephus:

Tacitus writes in Book 15 of The Annals:

“Christus, from whom the name had its origin, suffered the extreme penalty during the reign of Tiberius at the hands of one of our procurators, Pontius Pilatus, and a most mischievous superstition, thus checked for the moment, again broke out not only in Judaea, the first source of the evil, but even in Rome, where all things hideous and shameful from every part of the world find their centre and become popular.”

Josephus wrote in AD 93 in his Antiquities of the Jews:

“Now there was about this time Jesus, a wise man, if it be lawful to call him a man; for he was a doer of wonderful works, a teacher of such men as receive the truth with pleasure. He drew over to him both many of the Jews and many of the Gentiles. He was [the] Christ. And when Pilate, at the suggestion of the principal men amongst us, had condemned him to the cross,[9] those that loved him at the first did not forsake him; for he appeared to them alive again the third day;[10] as the divine prophets had foretold these and ten thousand other wonderful things concerning him. And the tribe of Christians, so named from him, are not extinct at this day.”

From these sources we know that Jesus was crucified, and it’s inconceivable that Jesus did not die on the cross. The Romans were very efficient and thorough in their execution.

2. Jesus Was Buried in the Tomb of Joseph of Arimathea

There’s no reason for the church to create an incidental detail as this. Arimathea has no symbolic meaning.

3. The Tomb Was Discovered Empty on the Third Day

All four Gospels testify that women discovered the empty tomb. This minor detail is important.

In first-century Judaism, women were not considered reliable witnesses. They would have never been allowed to testify in a court of law.

Think about this: the church would never have created stories about women discovering the empty tomb in a context where women were not considered credible witnesses.

Paul, a primary first-century source confirms that more than 500 people saw Jesus alive, many of whom were still living at the time of writing:

5. The Transformed Lives of the Disciples

Before the resurrection, the disciples were a small band of defeated, cowardly followers of Jesus. But after the resurrection they could not be silenced by persecution, the threat of martyrdom, or death itself.

There’s even more to the story. Learn the five theories that explain why Jesus didn’t rise from the dead—and how you can respond. All of this is found in unit 16 of the online course on Jesus and the Gospels: Four Portraits, One Jesus.

This course is valued at more than $1,000, but enroll today for way less!

P.S. Don’t miss out! Get the latest updates on freebies and news about online courses from Zondervan. Sign up to stay in the loop!

Tagged as apologetics, crucifixion, Jesus, reliability of the bible