Blog / What Is Important About the Land of the Bible?

What Is Important About the Land of the Bible?

If you want to understand the Bible, you have to understand the land of the Bible. It is not only central to the covenant of God, it is the geographical stage on which the magnificent drama of the people of God is played out. You may be surprised when you take a closer look. After you read this, consider going here to watch a 9-minute video giving you a visual understanding.

One of the ways we know that the truth of the Bible is rooted in reality is that the story of the Bible—the drama of God’s interaction with humanity—unfolds in a real place. This is a real God engaging with real people across a timeline that goes for thousands of years in a specific part of the world. The Bible is not detached philosophy. It tells us what happened (in history) so that we can understand what happens (in life).

After the Pentateuch (the first five books of Scripture), there is a major transition as the wandering Israelites entered the ancient land of Canaan. Under Joshua, the Israelite armies conquered this territory promised to them by God as an inheritance (Josh. 1:1-6). The small land of Israel, just 200 miles long and 100 miles wide, would be the main stage for the drama of redemption until the world-changing mission of the apostles—altogether a span of two millennia.

What is it like, this “good and spacious land, a land flowing with milk and honey” (Ex. 3:8)? To the Hebrews who had left slavery in Egypt 40 years earlier, it was a true blessing. It wasn’t paradise, but the plains and hills were a good land for farmers who grew crops of wheat and barley, who developed groves of olive and fig trees, and tended vineyards. The coastal climate is similar to that of Southern California.

In the Old Testament, we find the connecting points between land, life, and theology. The three great festivals (Passover, Firstfruits, and Ingathering) corresponded to the beginning and end of harvests. Rain is the grace of God. Food on the table is the blessing of God. Drought is a time of testing. The land also supported the herding of sheep and goats. So it was easy to describe God’s care as his shepherding (Ps. 23), and Jesus as “the good shepherd.” Real land, real life, real people, real God.

But Israel was a difficult land to live in from a political point of view. The surrounding kingdoms were an almost continual threat, and part of that has to do with the geography of the land of Israel. If you look at a map of the region, what you will see is that this small strip of land is hemmed in by the Mediterranean Sea to the west and the Arabian Desert to the east. Then, to make things even more complicated, the region to the north and east—known as Mesopotamia—was home to a succession of aggressive empires: Assyria, Babylonia, Persia. To the south and west of Israel lay the great land of Egypt. So Israel is a small bridge of land between sea and desert, standing in the way of superpowers to the northeast and the southwest. This explains much of the history of the Old Testament. It is amazing, actually, that there were even brief times when Israel was strong enough to have security and stability.

To understand more about this place and the events that transpired there, picture this bird’s-eye view of the land. Going across the land from west to east, there are five main regions (picture them like strips running north to south). First, is the coastal plain. Flat, fertile, and lush, this is a desirable part of the land, and thus contested by people like the Philistines who occupied the southern coast for centuries. Chariot battles happened here—not so in the central mountainous region of the land. 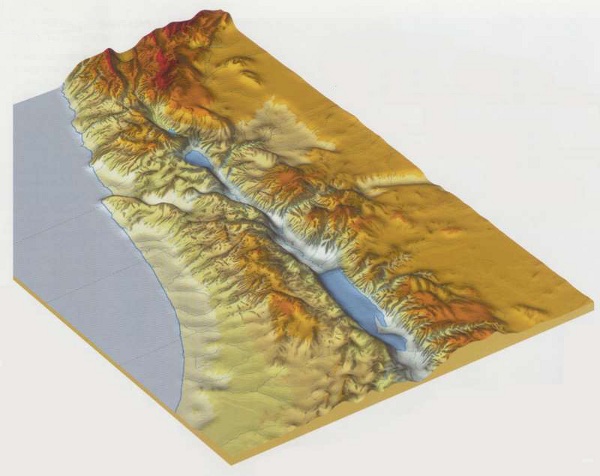 To the east of the coastal plain are the foothills known as the Shephelah, which slope upwards to about 1,300 feet. The gentle hills of this region are also fertile, crisscrossed with olive groves and fig trees. It is also the battleground for many fights in the eras of Joshua and the Judges, and it’s the region where David famously stood up to the Philistine champion Goliath.

Moving east again, we come to the central mountainous region including Judea and Samaria. These low mountains—rising to just 3,500 feet—are rocky limestone hills, undulating across the landscape. Jerusalem sits on a set of such hills, as does Bethlehem.

The fourth region is the Jordan River Valley, which drops dramatically from the central mountains to below sea level.

And finally, to the east again, the high plateau region known as Transjordan rises. From here Moses viewed the Promised Land he was not allowed to enter.

In the north is the fertile plain and productive sea known as Galilee. More about that when we get to the New Testament.

This is “the land.” More than geography or a patch on a map, it is central to the covenant promise of God. Yet by the time we get to the new covenant, we find that God’s geography and the mission of his people extends to the whole world, just as he promised to Abraham, the man from Mesopotamia who walked across the chalky hills—“all peoples on earth will be blessed through you” (Gen. 12:3).

Get a visual understanding of all this: Watch a 9-minute video here.

Next time: “How Should We Interpret What the Prophets Had to Say?”

Care to offer feedback this week?