Blog / Section Headings in the Bible

Section Headings in the Bible

Have you ever wondered where the bolded section headings in the Bible come from?

“Abram and Log Separate” is an example of a section heading

With the exception of the titles in Psalms, the Bible’s authors didn’t write their books of Bible with chapter or section headings in mind. They were added later by translators in order to help organize and divide the Bible into easier to digest pieces.

You’ll note headings in most English translations of the Bible, though they do vary across different translations. For example: Genesis 1 begins with the heading: “The beginning” in the New International Version 1984 translation, “The Account of Creation” in the New Living Translation, and there’s no header at all in the King James Version. A side by side comparison of Genesis 1 in five translations easily highlights the differences in section headings.

Occasionally though, you might find that the headers can disrupt the continuity of the text. Bible Gateway allows you to hide headings under the “Page Options” feature. Simply click on “Page Options” and deselect “Headings”: 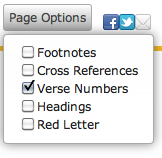